How do you feed the world? Like This! Watch the video.

“…Can we supply enough food for everyone on the planet?” It’s a question plaguing leaders around the world. In Singapore SkyGreen offers one example of how this might be possible, “not just technically, but economically”. By increasing their food security while reducing the impact of food production on global climate change, SkyGreen is 10 times more productive per square foot than conventional farming…”

EATON: Singapore has one of the highest population densities on the planet. More than five million people crowd into this small wealthy island city. Land here comes at a premium, forcing people to expand up rather than out.

And it’s not just office towers and apartment complexes that are reaching skyward.

NG (7939 :33) This is the framework. The greenhouse and also hold our vertical system.

EATON: 50 year old entrepreneur, Jack Ng, an engineer by training, is the farm’s owner and designer. Translucent structures, nearly four stories tall line the property. On the inside automated towers of vegetables rotate like Ferris wheels in slow motion between a nutrient-infused bath below and the sun above. Ng says each tower is powered by a gravity-fed water wheel.

EATON: It’s an ancient technology with a modern twist. A low-power pump returns the water to a reservoir at the top. Ng says one of the biggest benefits of this closed loop, hydraulic system is how little energy it consumes.

EATON:That’s three dollars a month to run this entire tower… or about the same amount of electricity used in single 60-watt lightbulb.

EATON: Eating local, freshly picked greens is a luxury in Singapore. With just 250 acres of farmland left, the city grows only seven percent of the produce it consumes. That may be an extreme case, but it represents a looming problem facing cities all over the world, says Columbia University ecologist, Dickson Despommier.

DESPOMMIER (11:24) We’re going to reach a tipping point really soon where traditional ag can no longer provide enough food for the people living on the planet.

EATON: Despommier says producing enough food for the three and a half billion people living in cities today requires an amount of land twice the size of South America.

DESPOMMIER (3:13) Now that would be ok if we could stabilize our population at 7 billion. But that’s not going to happen.

EATON: Despommier believes that 80 percent of the world’s population will be living in cities by 2050… making today’s challenges seem trivial by comparison.

EATON: SkyGreens’ vertical farm offers one example of how that may be possible, not just technically but also economically. The system is ten times more productive per square foot than conventional farming. It also takes a lot less water, labor and chemical inputs.

EATON: But Lee says visit any Singapore restaurant and you can see just how far the country is from being self-sufficient.

EATON: Maintaining that supply of food from so many foreign sources is a monumental task. Every night hundreds of trucks enter Singapore from Malaysia and beyond, unloading their cargo of fruit and vegetables at this central wholesale market. From here the food is loaded onto smaller trucks and delivered throughout the city before sunrise.

STANDUP: More than 90 percent of the food in Singapore’s grocery stores like this one comes from foreign countries. That makes local, urban produce like SkyGreens a premium novelty for customers. But to some it’s much more than that. It’s an insurance policy.

EATON: Supermarkets buy food from dozens of other countries as a defense against climate-related disruptions in the global food chain. But the National Institute of Education’s Lee Sing Kong, says that even that may not be enough to guarantee a steady food supply in the future.

LEE SING KONG, (7767-synced, 16:23) We do anticipate that the need for our own production to a certain level of self-sufficiency. I think the government has set a target – initial target of 10% to 20% of our need and if we can achieve that I think there will be a great feat that we have attained.

LEE SING KONG, (7768-synced, 0:16)Whatever we produce in Singapore must compete with the prices of vegetables coming in Singapore. // So that’s why the government in Singapore is now encouraging// models of urban farming that can really not just increase productivity but also lowering cost of production

EATON: Skygreens owner Jack Ng says he’s confident he can compete. Three years into his experiment, he says his operating costs are only a quarter of what it would cost to run a conventional farm.

And since he’s local, his transportation costs are also minimal, making his fresh lettuce and chinese cabbage price-competitive with mass-produced, cheap imports.

But most importantly, Ng says they taste better. He says the “same day” freshness of his greens is a real selling point.

EATON: Ng has raised 28 million dollars in public and private money to more than quadruple his capacity over the next year and a half.

And in fast rising Singapore, that seems like a smart investment. 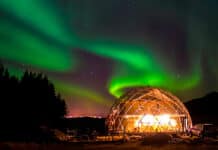 A Cob House Built Inside A Geodesic Dome In The Arctic