Jenine Alexander built this tiny house for less than $3500 using mostly reclaimed materials and good old fashioned hard work. This is yet another example of the accomplishment you can achieve with a little out-of-the-box  thinking. Forget everything they told you about how much it takes to build a home. All it takes is determination, and the dream. Throw in some ingenuity and creativity, and $3500 later you can have your own cute little tiny home too.

In a town where the median home price is over half a million dollars, Jenine Alexander decided to build her own. Using resources like the tiny house blogs and the 1950 bestselling DIY book “Your Dream Home: How to Build It for Less Than $3,500” (a gift from a friend), Jenine spent less than $3,500 on her home.

Kirsten Dirksen is co-founder of faircompanies.com and a Huffington Post blogger. She has worked for MTV, Oxygen, The Travel Channel and Sundance Channel. Her documentaries include “Searching for Da Vinci’s Secret” and “Translating Genocide: Journey to Sudan”. “We the Tiny House People” is her first documentary to premiere on youtube. 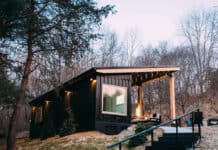