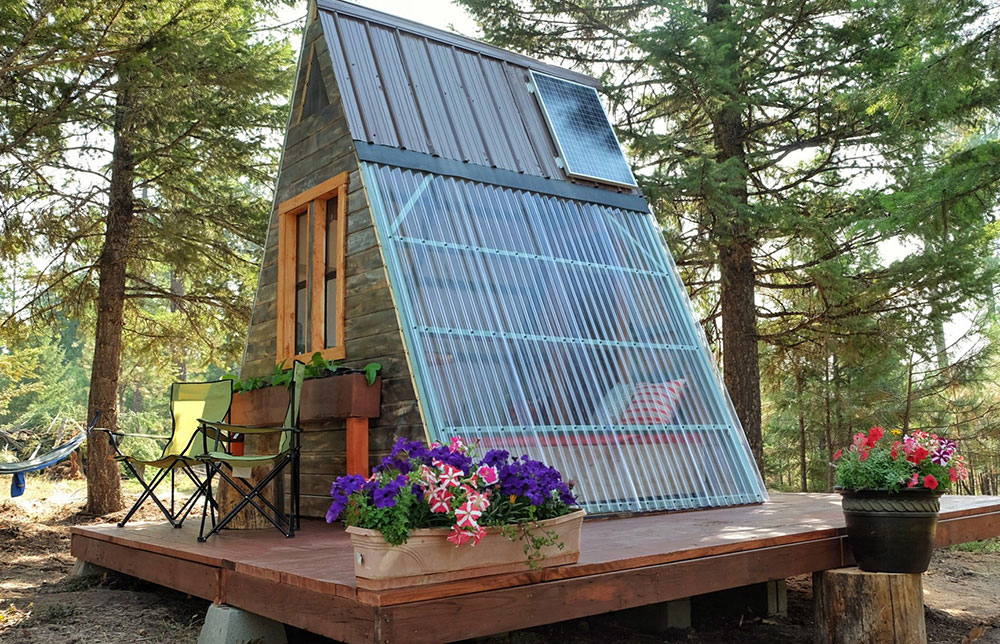 At just 80 square feet, this solar powered A-frame tiny cabin in Montana is minimalist perfection, and it was built for the shockingly low cost of $700.

Photographer and travel blogger Alla Ponomareva and her husband, who had built a tiny cabin before this one, searched for plans to build a second tiny guest cabin on their property. This tiny A-frame concept caught their attention, and once they started, it took only about 3 weeks to complete. 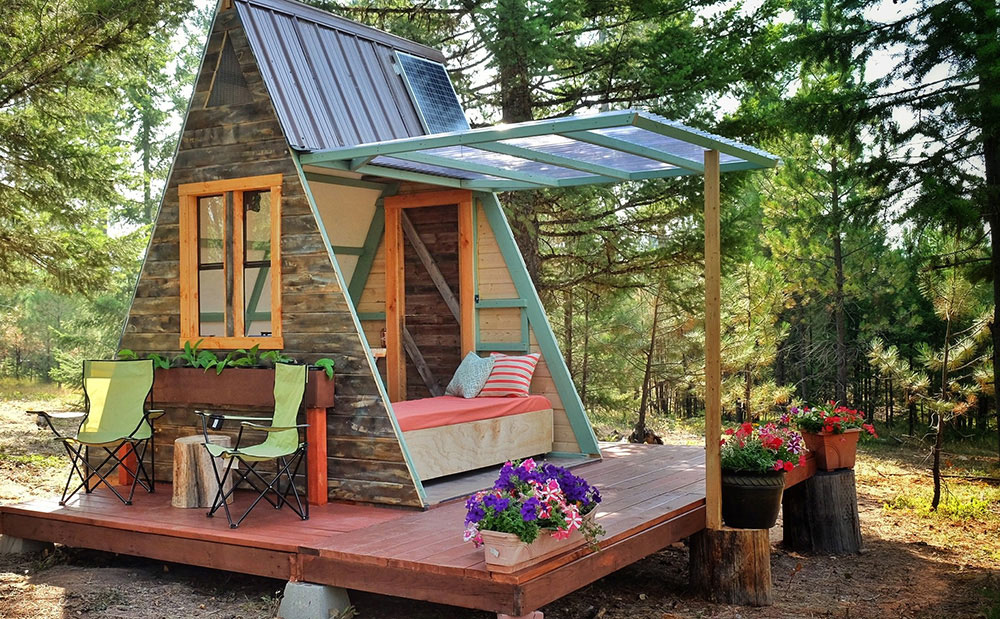 The plans for this cabin came from Derek “Deek” Diedricksen of relaxshacks.com. If you’re a fan of tiny houses, you’ve probably heard of him; he is an author, host of HGTV’s Tiny House Builders, and host of hands-on tiny house workshops. We’ve featured his work before, including this tiny cabin built for $300.

My hubby and I came across one of Deek’s creations this spring, while browsing tiny shacks online. This particular A-frame was so adorably tiny, yet multi-functional that it made us pause and take notice. Unlike other designs, it had a transformation element which increased its square footage and gave it an undeniable character.

One thing Deek is known for is using reclaimed materials on his tiny house builds. That is how this particular A-frame cabin was built on such a low budget; much of the wood, nails, roofing, and windows were salvaged scraps or recycled from other projects.

The beautifully aged wood on the cabin door, for example, came from an old deck. The biggest cost that went into the construction of this cabin was the solar panel, and those have come down in price since the time of this build.

Perhaps the most charming feature of this cabin is the wall/roof that can be propped open to bring the outdoors in.

The deck – also built with salvaged scraps of wood – adds additional outdoor living space to the cabin. This area of Montana has very few mosquitos, making this the perfect space to enjoy summer nights outdoors by the light of the moon and stars. 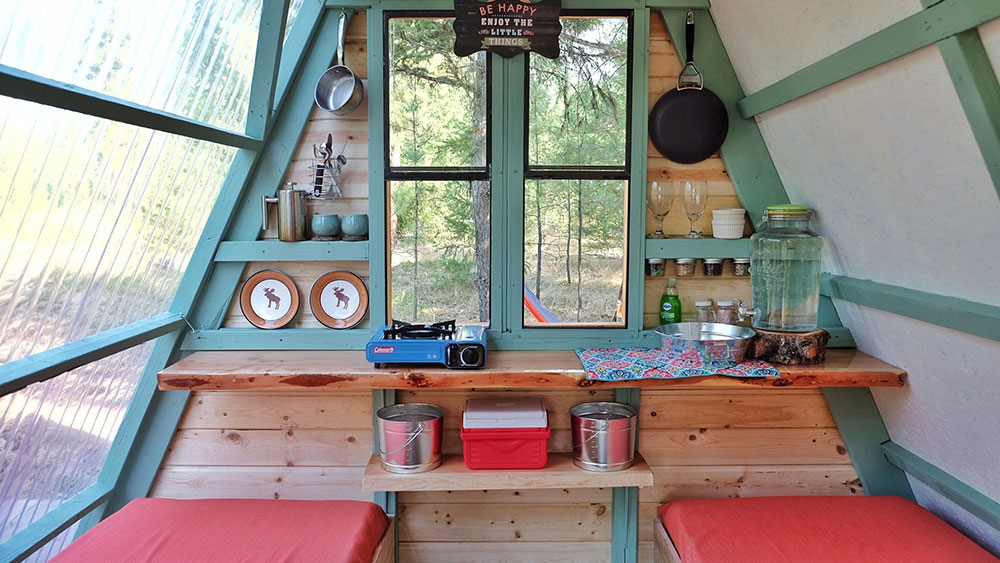 Inside the cabin, you’ll find two built-in beds, a countertop built from salvaged wood, and some shelving space along one wall and above the door. The pillows and mattress covers were handmade to match the pop of mint and coral colors the builders chose for the cabin interior.

From start to finish this project took about 3 weeks to complete, recycling and upcycling as much as we could. In total, this A-frame cost us about $700…That’s the beauty of reusing materials and building small, it’s inexpensive, quick and so much fun!

Though the lack of a kitchen and bathroom would prevent most from using this cabin as a full-time residence, its low cost and tiny size make it an ideal starter project for beginner builders. Can you imagine having this as a backyard retreat, weekend getaway cabin, or studio? I sure can!

Read more about the building of this cabin on Alla Ponomareva’s blog. We love seeing tiny house projects like this, especially when they use recycled materials! 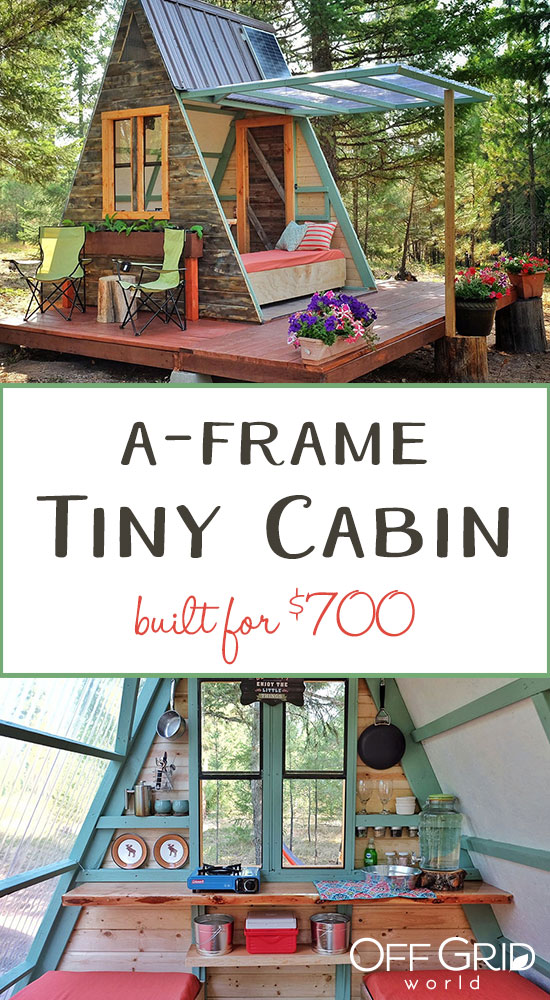 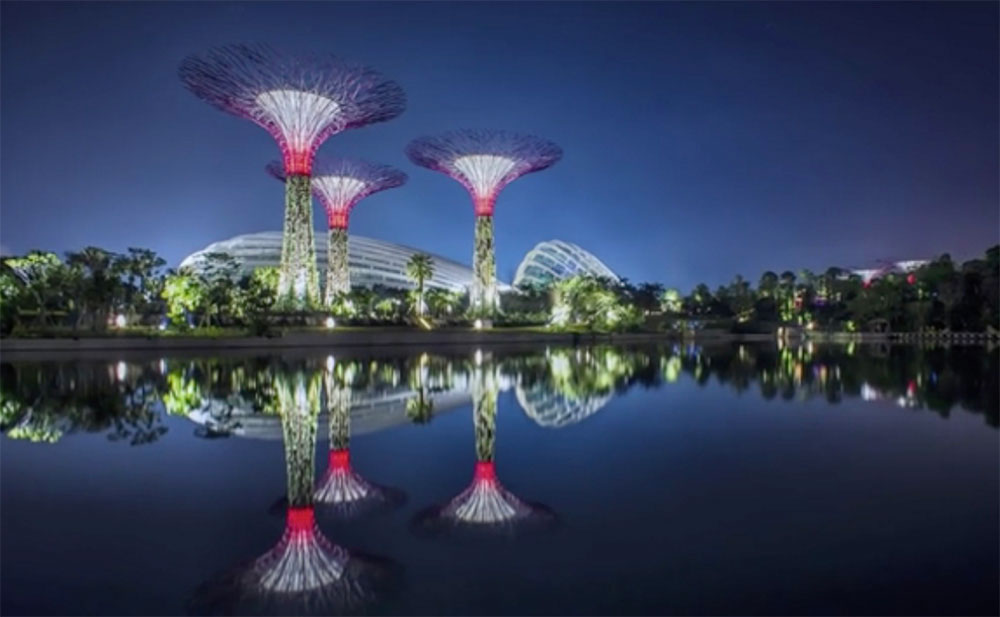 This Little House is Absolutely Incredible - and it's Made From Hemp!
Read Next Post →
Click here to cancel reply.