The Australian company, Bruder (Brother), makes some of the most advanced campers available. The Bruder EXP-6 has a distinct military look on the outside, and it is certainly rugged enough to meet military standards, but on the inside, it has all the bells and whistles you would expect from a high-end camper.

The EXP-6 is designed to meet the challenges of any environment and road condition, so it can pretty much go wherever your tow vehicle will take it. In fact, it probably has a better suspension than most stock pickup trucks that you would likely hitch it to, which means it may be a tad over-engineered for most civilian use, but it is better to be overqualified, especially if you are headed out into rugged terrain, in my opinion anyway. 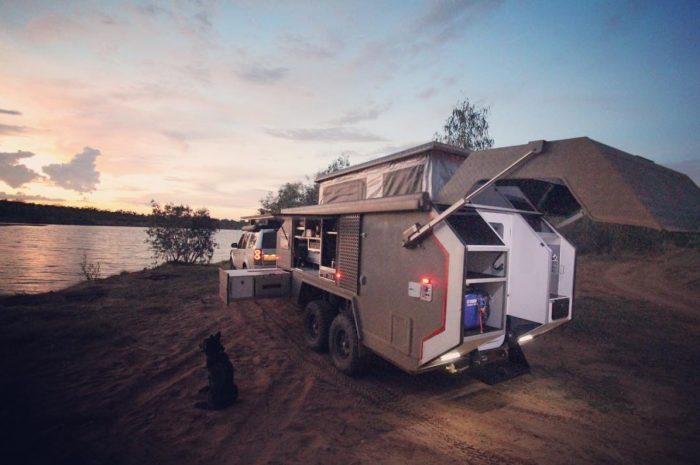 The suspension has a full 12” of travel and the exterior design has virtually no hang-up points, which means it won’t be getting caught on anything as you move to your camping spot. Since it can also withstand up to 11 times its own weight, is watertight, and has an integrated electric winch, it is set to go wherever you want to take it.

On the inside, the EXP-6 isn’t exactly “roughing it”. It features plenty of storage, a queen-sized bed with an additional sleeping area, a built-in couch, a bathroom with shower, two built in refrigerator/freezers(one interior and one exterior), and a kitchen that you can use either from the inside or the outside thanks to the outside access panel. There are more storage compartments on the outside, as well as a foldout table, a nose storage box, and even an external shower/hose.

The Bruder EXP-6 has all the features you need, and rivals some of the mobile tiny homes that are out there, so it could be used as a mobile tiny home if you wanted it to. They are made in Australia but available worldwide and the EXP-6 can be powered with solar panels.