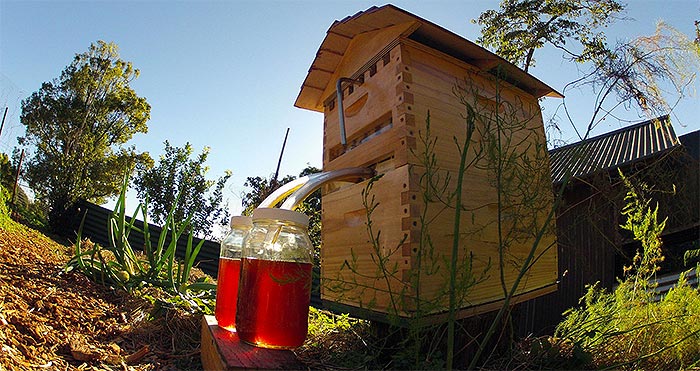 You know you love it: that smooth amber flow of rich nutritious sweetness, that distinct rich flavor, that gorgeous natural bronze hue. You put it on your cereal, in your tea, in your coffee, you drizzle it on hot rolls, sweet buns, your lover. You know what I’m talking about: Honey!

In the ancient fertile crescent of civilization, before high-fructose corn syrup, refined cane or beet sugar, even maple syrup, there was honey. It was mixed with wine to create a sweet and savory beverage by the Greeks, so celebrated by Homer. Honey is a nutritious source of energy, with trace B-vitamins and just a hint of hydrogen peroxide which makes it naturally antiseptic and resistant to spoilage.

But Honey might not be long for our cupboards and dinner rolls. Honey is only produced by one genera of animal on this planet: Bees. And bees are dying. Not only will we need to learn to suffice with honey-flavored corn syrup on our KFC biscuits (Curse you Colonel!) but our crops will lose the ability to have sex. Bees are a crucial organ of pollen transport for plants, especially the flowering ones that produce our fruits and grains.

Our food supply will rely on artificial pollination methods which are expensive and not always effective. And if our agriculture must rely on artificial pollinators, what about the rest of nature? Plants will adapt, to be sure, and while green will remain one of the hues of the earth, flowers may become a scarce commodity, no longer a suitable strategy for seed propagation. Animals that rely on honey as a food source will need to search for other sources of energy. Honey Badger may not care now, but when the bees are gone, well, what will he do with himself!

While there will be solutions to the pollinator problem, the best solution to any problem is always prevention. We see the populations declining, some causes have been pointed out but there is still so much we simply don’t know. While the engine of research trundles along in search of answers, the rest of us can do our part to preserve the pollinators.

It’s easy to talk about the decline of the bee population with angry shouts of “We need to make changes! We need to do something about this!”, but in the end we look at the problem in defeat, not knowing what to do, or how to do it. Now, with the new Flow Hive beehive kit, you can really put your honey where your mouth is, and become a protector of the pollinators, a champion of crops and wildflowers everywhere, a humble keeper of bees.

The Flow Hive is pretty awesome. You get the whole kit-and-kabeedle for under $300 bucks, just add bees. Now, like any living creature, you really ought to do some research into how to handle and care for the little critters, but the Flow Hive makes it easy and safe to set up your hive and harvest the honey after a few weeks without destroying the hive.

The specialized frames allow the bees to store their honey, wax up the holes, and then with the nifty little tool, you just crank out the honey and let it flow out into your container of choice. Viola! Pure, raw, delicious honey! Now, you need an open area, and you need flowers, so you probably won’t have much success on the porch of your studio apartment in the Bronx. But if you’d got the space, and the means, then you’re virtually obligated to set up a hive or three FOR THE FUTURE OF HUMANKIND!!! No pressure.

The Flow Hive flow frames replace traditional honeycomb frames and reduce the need for the bees to build each comb from scratch. Bees will use 2 pounds of honey just to make 1 pound of wax, so saving them the trouble puts more honey in your pot. Plus, you don’t have to go through the trouble of taking apart the honeycomb to get at the honey, which saves both you and the bees some aggravation. 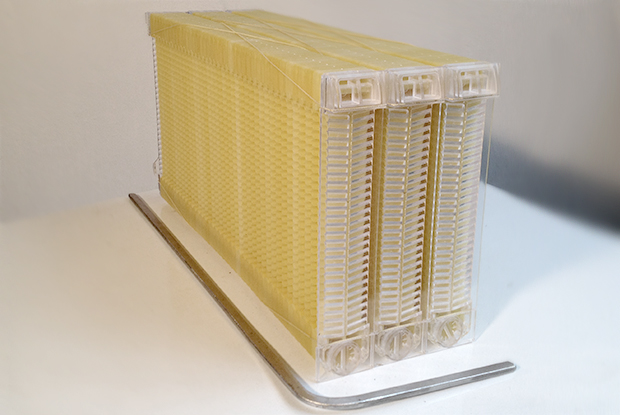 Flow Hive has just started a 45 day Indiegogo campaign and after only a few days they’ve already funded 3800% of their goal! That’s over 2.5 million dollars! But don’t let their success put you into complacent “Let everybody else save the world I’m just gonna sit on my ass and eat Cheetos!” mode. Thousands of funders have pledged to start their own hives, but it’s a big ‘ol world, and we’re fighting an uphill battle against a faceless foe.

Honey prices have nearly doubled in the last decade. Bee colonies in the US alone have been cut in half since the mid-20th century while the demand for bees has only increased. And imagine the extra income. Raw honey goes for about $17-$20 a pound and a full Flow Frame will hold up to 6.6 pounds of honey and a fully functional hive with plenty of nectar can fill a hive in as soon as a week and on average a month.

With a Full Flow 6 frame kit, which is at the $600 fund level right now on Indiegogo, that’s almost 40 pounds of honey a month that can be labeled and sold as raw for about $600 to $800, which immediately pays for the kit. Now that’s how you make money off-grid! What’s better, the flow frame reduces the amount of processing you need to do to the honey, so you can virtually sell it straight from the hive! In addition to selling honey, your off-grid crops will flourish under the parentage of your own beehive, and you can even breed the bees to be sold to farms.

So GO! Right now! Go to Indigogo and reserve a hive or five! And then go read up on some beekeeping basics. You owe it to the earth whence your life sprang and the debt we all borrow from our children!