The Rodale Institute in Kutztown, PA set out to answer that question about 34 years ago, and, according to their 30 year “Farm Systems Trial” the answer is a resounding “YES!” To proponents of organic farming, this sounds like a clincher for their arguments: A study they can throw in the face of all the naysayers out there poo-pooing organic produce as overpriced and organic farming as inefficient. But is it really true? This is where things get tricky.

Before I start laying on the brickbats, I’ve got a full bouquet of roses for the Rodale Institute. They are a secular non-profit with a  four star rating on Charity Navigator, a charity watchdog site that I highly respect and provides a detailed analysis of a charity’s accountability to its donors. So, these people aren’t crooks, and they provide a wealth of information for those interested in organic farming. They provide online classes in transitioning to organic farming methods, host events, and give webinars. If I were to refer anyone interesting in starting an organic farm to any website, it would be theirs.

They make some interesting arguments regarding soil improvement as a strong benefit of their organic farming methods, and I can see how these would benefit any farming practice. There is some recent research out of the 2014 Google Science Fair showing that symbiotic bacterium with legume plants can be applied to non-legume species and improve crop yields and grain size, and using legumes as a cover crop introduces these properties into the soil. This is valuable information that can be applied to “conventional” farming, which still represents the vast majority of food production. I applaud their advocacy of these methods to improve food production across the globe. However, I have reservations about their research.

They released a white paper on their Farming Systems Trial in 2011, 30 years after they began the project in 1981. It is a very well-produced document that shows a lot of interesting information, but it also holds a very strong bias towards their hobby horse: organic farming. Now, bias doesn’t necessarily mean they are wrong in the claims they are making, but they include some dubious sources in their “References” section such as suspect NGOs that have biased agendas that are not supported by the scientific literature.

It should also be noted that a “white paper” is not a “scientific paper” and the thing reads like a pro-organic sales brochure. It shows colorful graphs and makes several claims stated as facts borne out by their research but do not provide details regarding their methodology, materials, controls, or even any source data for the graphs they include in the paper.

Since it does not provide this information, it can’t be peer-reviewed by other researchers to make sure they did the math right on their graphs. There is no information regarding the types of pesticides used (yes, organic farming still uses pesticides). They are very vague on what they actually did for the conventional crops only loosely citing Penn State Extensions as their standards (With no link in the references), which is an informative but very broadly resourced site.

There are different pesticide recommendations for different pests. That’s a bit like saying “We used Chilton auto repair manuals as our source for conventional auto repairs and maintenance” without ever mentioning what maintenance or repairs you had to perform over the 30 years you owned cars. Good research would require a log of every application to prove that you even used pesticides at all. Considering the close proximity of their “organic” crops to their “conventional” crops (See image below) I find it highly suspect that they would apply herbicides and pesticides at recommended levels and still be able to consider their organic crops uncontaminated. 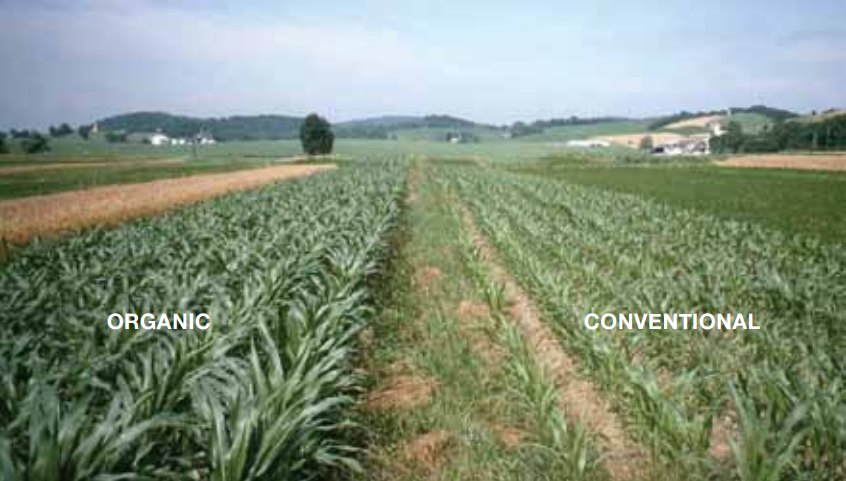 The image is of low quality, so it could be a combined image but the horizon seems consistent and there is no artificial delineation between the organic or conventional halves of the image to indicate that these crops are not within a few feet of one another.

When doing science, you need to remove as much of your bias as you possibly can, but, as they state on their research page:

…give farmers the tools and knowledge to increase soil health, crop quality and yields while simplifying farm management overall.

…ensure citizens feel confident the food they feed their families is good for them and for the world around them.

They are setting out to prove their ideological preconceptions about organic farming. With such an attitude, how can anyone honestly state that they’ve been objective in their reporting or handling of the crops that they are trying to beat out? The actual yield numbers aren’t vastly different, so even if they are unconsciously sabotaging the conventional crops, then it isn’t overly destructive. What’s more, they decided, 3 years before the end of the study, to suddenly roll in genetically modified corn and soy to better reflect modern farming in America.

I understand the idea behind it, but you can’t do that! You’ve just contaminated your study. 10% of their conventional data is now corrupted by changing the variables of the study during the home stretch. If they wanted to grow GMOs to get additional data, then they should have started another row and only compare data for the last three years. Did they adjust their herbicide and pesticide applications appropriately according to the traits the GMO crops were engineered for? They also changed to a “no-till” system for the conventional crops, essentially invalidating the last 3 years of their data.

The other problem with this study is that it is in direct contradiction to similar studies performed by the USDA showing a lower yield for organic crops across the US. Now, I’m not saying the USDA is the final word on the subject, but the data they are using data from a variety of sources whereas Rodale is using a small sample from a single area.

They could have just as easily had the exact opposite results in another state with different rain and soil conditions. Rainy areas suffer from damper soil and therefore fungal infections are a real problem. Options for organic fungicides are limited to copper based solutions which are vastly less effective than conventional fungicides, meaning that when fungus takes hold, organic crops suffer, and organic farmers are helpless until ideologically approved alternatives arise.

Thus, organic yields are much higher in dryer areas like the west, rather than in rainier areas like the midwest and east. Granted, Rodale is in Pennsylvania, but the weather in Kutztown is relatively mild, the average rainfall is fairly even throughout the year and peaks at 5.04 inches in July with an annual average of 44.77 inches which excludes it from the top ten wettest cities in the US. A study in the southern states could show very different results.

Steve Savage, from whom I’ve gleaned most of this recent data, is a consultant for agribusiness, but he also has good things to say about organic farming techniques, but, like me, he’s more interested in science-based sustainable agriculture, without the ideological trappings that go along with the organic movement.

Conventional farms can learn a lot about soil improvement from the organic movement, but without ownership, why would they look at the long view? In my opinion, if we’re going to survive, we need to look at the big picture without getting tied up with ideological baggage. What works wins, and we need things right now that work, and will continue to work for hundreds or thousands of years. Rodale states this much in their FST white paper, but they seem to think organic is the only game in town, at the exclusion of all else, and that’s a blinker that can get in the way of real science.

Editor’s Note: Although the Scientific Method was broken and the data was skewed during this study, and the benefits of organic growing vs conventional agriculture is not clearly represented here, it’s probably safe to say that “organic” growing did perform very well. Another study should be performed to conclusively prove the advantages of organically grown crops.