First Commercial Vertical Farm in USA Being Built in Wyoming

We have a problem. A big, BIG problem. The human population has tipped the scales at 7.2 billion people over the last few years, and almost a billion of us are undernourished. People in Africa, China, North Korea, the Middle East, and on America’s Next Top Model are starving. Some are for political reasons to be sure, but most are due to environmental reasons: drought, famine, poor soil.

They simply don’t have the resources to combat these issues sufficiently. What’s worse is that these areas are beginning to see the first signs of the long-term impacts of a changing climate. Rain doesn’t exactly go where it used to, and rampant grazing and poor crop management have led to rampant desertification of once fertile fields.

These areas are dying a death of a thousand cuts, with numerous causes leading to the effect that these lands are simply incapable of sustaining a booming human population. The deaths from hunger are a testament to this unnerving fact. When an environment cannot sustain a population, portions of that population suffer and die.

While you’ve been reading this, about 5-10 people, somewhere in the world, have died of hunger. And I’m not writing this to make you feel guilty, I mean, if you think about it, you have a computer, and you have the internet, so you probably ate breakfast this morning and plan on eating something filling for dinner, but rather consider this a warning.

Helping those who are hungry now, while a worthwhile endeavor, is beside the point that our own affluent population may see similar consequences. Consider for a moment that, In 2011 alone, the United States suffered a loss of about 110 billion dollars worth of grain due to drought.

Now, the United States is a fat country, and we can absorb that kind of loss now, but as the climate changes and the rains shift, these droughts will become more common, and more severe. We rely heavily on the crops of other countries to sustain us even now, and our reliance on others will only increase. The lower-income classes will be impacted the most. When crops are lost, prices increase, and the droughts hit us all right in our wallets.

The consumer price index for common groceries has already skyrocketed over the last decade. Beef has become nearly a decadent commodity, having raised about 18% year over year with the supply dwindling. Now, I’m no vegan, but meat is gradually becoming financially unjustifiable. Capitalism may turn me into a vegetarian long before ethics! Even bacon, that most holiest of meat products, has taken less real estate on my plate as of late.

Year by year, our gustatorial landscape is changing, and if we don’t start thinking smarter about how we produce food in this country, America will begin to see the dire impacts of having an unsustainable population. We may not witness this ourselves, but the signs will be there, and we will die knowing that our grandchildren will need to deal with these problems, and perhaps go hungry themselves.

If you haven’t slit your wrists just yet, there is good news afoot. In Jackson, Wyoming in a 1/10 acre vacant lot 1 mile above sea level, the future of farming is being built. Currently, large tracts of open land are used to produce food. The practice has been modernized, but the principle dates back to the dawn of civilization.

If you’ve ever flown over the midwest, you’ve probably seen the marks of agriculture from 30,000 feet as a patchwork of circles or squares of green, all growing the food we take for granted in the produce section of our local grocer. But this method is becoming unsustainable, and vulnerable to the threat of drought. You can only fit so many crops into a flat square mile, but if you start to plant up instead of out, you can increase crop density and overall efficiency by taking the native soil out of the equation and taking full control of each plant from root to fruit.

Vertical Harvest is a company that wants to capitalize on this growing method by creating the first vertical farm in the urban area of Jackson, Wyoming. By Fall 2015, they plan to convert a 1/10 acre vacant lot into a vertical hydroponic greenhouse that can produce as much produce as a 5 acre farm. Vertical Harvest is in partnership with the Town of Jackson on this project, and it might seem a risky venture, but they’ve already pre-sold 95% of their produce to surrounding businesses.

Maybe they’re onto something. Greenhouses have long been used for seedlings and non-native plants where climate control is key, Vertical Harvest is using this concept as the backbone of their production, allowing for a yearlong growing season. Crops will be rotated on conveyor belts to provide each with as much sunshine as needed. Vertical Harvest also plans to employ workers with developmental disabilities who otherwise have difficulty finding work, and part of the facility will serve as a classroom for agricultural education. After all, if Vertical Harvest is going to expand this model, they need knowledgeable people at the helm. 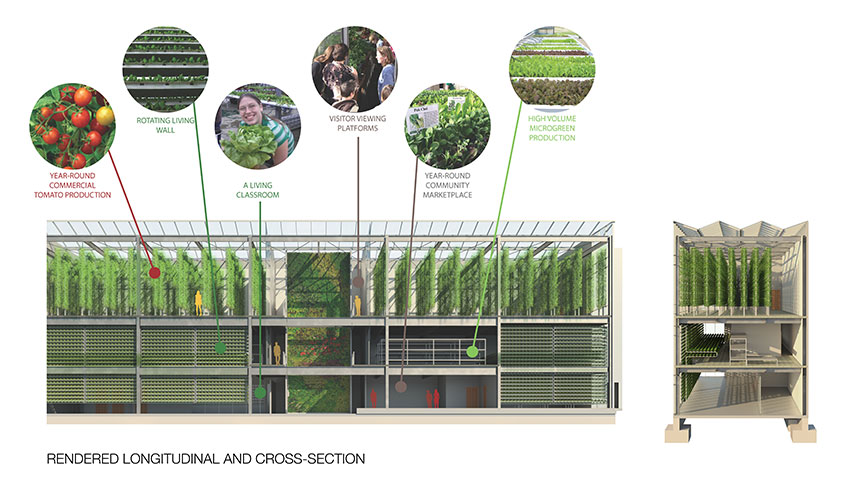 Now, imagine this concept deployed en masse. How many vacant lots and buildings are there in your average city that could be converted to growing crops. Energy is always a concern in a climate-controlled building, but we waste so much on comfort already that it seems a niggling concern to worry about it when we are talking about our food source. Portions of the building that are not for the greenhouse can utilize solar panels, and wasted plant material could be used in biomass furnaces to both heat the greenhouse in the winter as well as provide power for the facility.

What’s most important about this concept is its efficiency when it comes to water. Spraying water over a crop or even irrigating loses much moisture to evaporation and simple seepage into the deep earth. A hydroponic configuration allows water to be recycled through the system and evaporation captured through condensation. Such a practice is vital in desert areas such as Phoenix, Albuquerque, and Las Vegas, and even in drought-stricken midwestern zones.

Now imagine creating a double purpose for the facility. Fish is a valuable protein source, and our oceans are being dramatically overfished. The menu at your local seafood restaurant has changed drastically over the last 20-30 years, with whole species being supplanted by what were considered previously as “junk fish” and sometimes the fish on your plate isn’t what’s on the menu. If you kept the lower levels of the farm setup as a fishery and cycled your water supply through the growing tanks, all that wonderful nitrogen-laden fish poop will help fertilize your crops, reducing the need for outside sources and creating a meat crop to augment your business.

This practice is known as aquaponics, and utilizing aquaponics with hydroponics makes for a killer combo for sustainable food production. Vertical Harvest doesn’t seem to have this concept in their plans, but this is just the first facility. The demand is there, so I’m sure the business will follow. 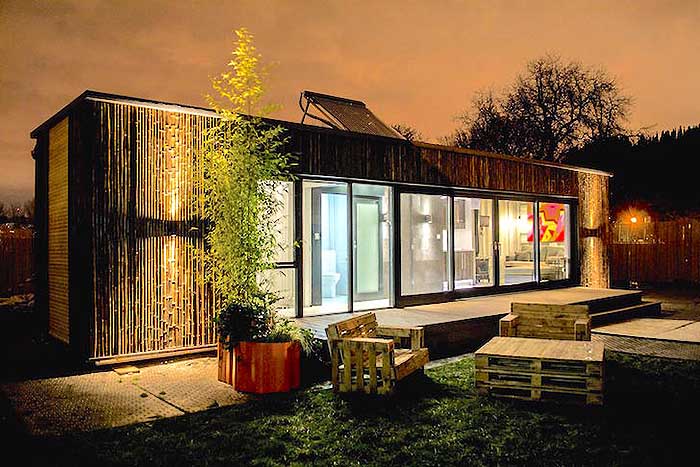 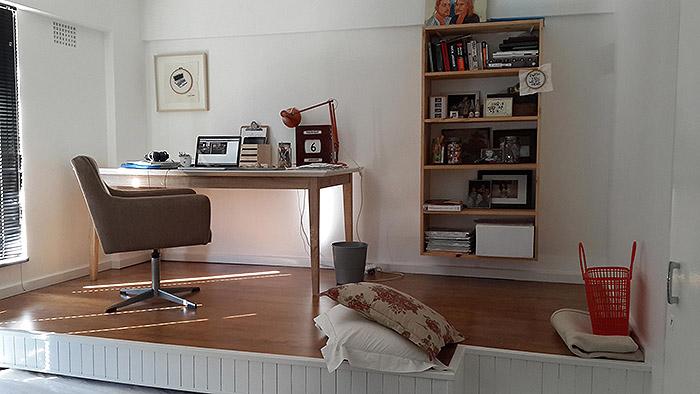 […] First Commercial Vertical Farm in USA Being Built in Wyoming […]