How much land would it take to power the USA with solar energy? About this much. 2.8 acres per 1GWh. Solar would have to produce about 4 million GWh of electricity annually to provide enough energy to power the entire USA.

Now I probably would not want to build an 11.2 million acre solar farm, but spread out across the whole country. That’s very reasonable. If every single-family home rooftop in America were covered in solar panels for example that would give us about half of the energy. How so? Like this. 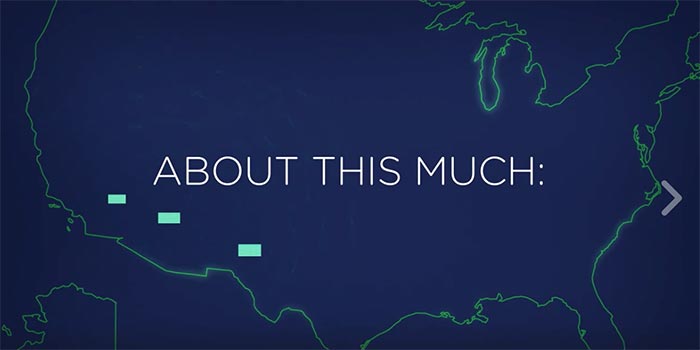 The average roof size in America is a little more than 2000 square feet, it’s more, but for simplicity and round numbers (because round numbers are easier) we’ll use the 2000 sqft measurement. Now, there are approximately 118 million homes in the USA, multiply that by 2000 square foot average, and that equates to 236 billion square feet, or 5.4 million acres of space (43,560 square feet per acre).

This would help us reach about half of our 11.2 million-acre goal. The rest of the solar generation area could be in the deserts and fields spread out across the USA.

Don’t forget, this only counts the single-family homes, not apartment buildings, or multi-family homes. It also does not count the millions of office buildings. Which could be solar power generators themselves with the new solar thin film technology which could be installed on every window of every building in the whole USA, essentially turning every building into a solar energy generating tower.

Buildings have a huge surface area. Technically even when in the shaded side of a building, solar panels can generate huge amounts of energy given their massive surface area. It would also make sense to cover buildings in solar panels or thin film solar panel technology because cities require and use more energy. It’s just common sense. In the future this will become standard in every new building I think because the building can help generate all the power it needs. As solar panels and thin film solar technology gets more efficient it’s possible there will be energy surpluses that can be pumped back into the grid.

With the advent of battery energy storage technology this means no more blackouts and if there is an energy surge or emergency there will be clean backup energy, not stinky noisy diesel and gas powered generators. All power would be generated sustainably and by the very building which use the power. Each building essentially becomes a solar power tower helping to generate energy for the entire city.

Solar power is growing fast and this is a very exciting time sustainable energy and technology.

We have the ability, let’s do it!