How To Build a Tiny House Utopia for Family & Friends 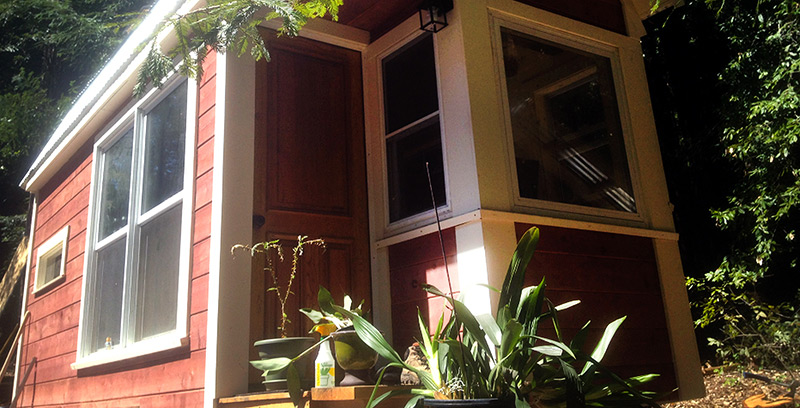 Friends, family and the birth of our Utopia the Tiny House. Some people call their family when they go into labor and are having their first born. We called to help raise our first house.

It wasn’t that it was a large home or particularly difficult undertaking as it was a time constraint – we were closing on the land on January 22nd and wanted to be into the house by April 1st.   On top of that, we needed to do so while Ross continued to work a full time job as an employee at Creative Visions in Monterey and getting time off for the project was difficult.

In stepped his mom and dad, Nick and Cathy.  When they came, his sister Anji followed shortly thereafter.  Suddenly we had half a dozen people standing at the wheels of our base floor lain trailer, ready to raise the roof, as it were. 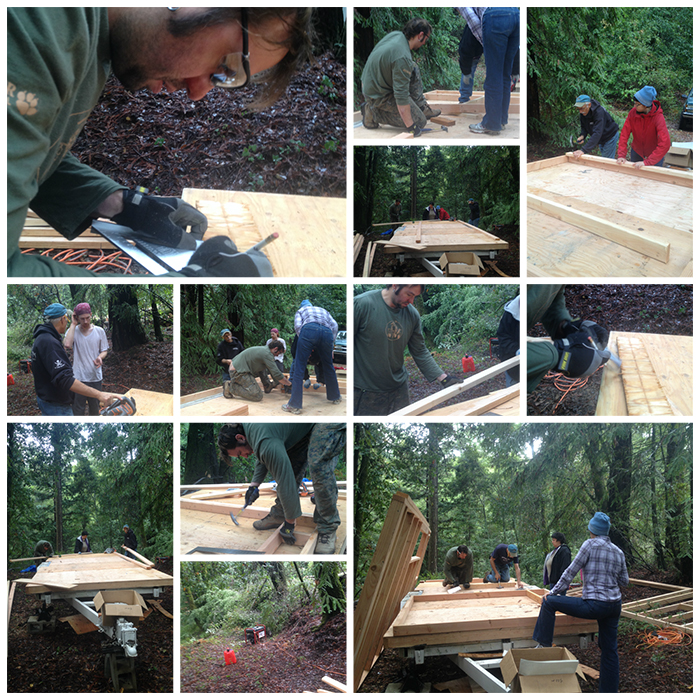 The framing for the walls was like magic.  Words were passed quickly back and forth between father and daughter, sister and brother, mother and son.  Jeff and I wedged in where we could, took commands when they came and did what we could where we fit.  They worked like a well-oiled machine in a way that would put the Brady Bunch to absolute shame.  Needless to say, the walls were done in a few frames, as it were.

Once this was done, it was simply a matter of putting the truck on the end of the hitch and cranking it up the hillside.  We had cleared a nice spot for it, after all, and the truck could tow 10,000 pounds, right?

Unless the tires are bald and it has been raining on the clay and redwood feather mush you’re trying to climb.

Instead of getting up the mountain we went sliding further down the hill with our trailer and its walls, the weight simply too much against the natural slip-n’-slide we were up against.

“There is where you live now,” Someone commented.  We all laughed because it was the first place we had chosen but there were too many trees in the way and we didn’t want to cut back any more.

“Should we wait til’ it dries?”

I stood there, useless and baffled by the conversations going on around me once again.  One trip to Home Depot later (did I mention we went there almost every day for those two weeks?) we were back on track.   We (Jeff and Nick, though I certainly tried and discovered that houses are heavy) ratcheted the house from the bottom of the hill all the way to the top one click at a time. 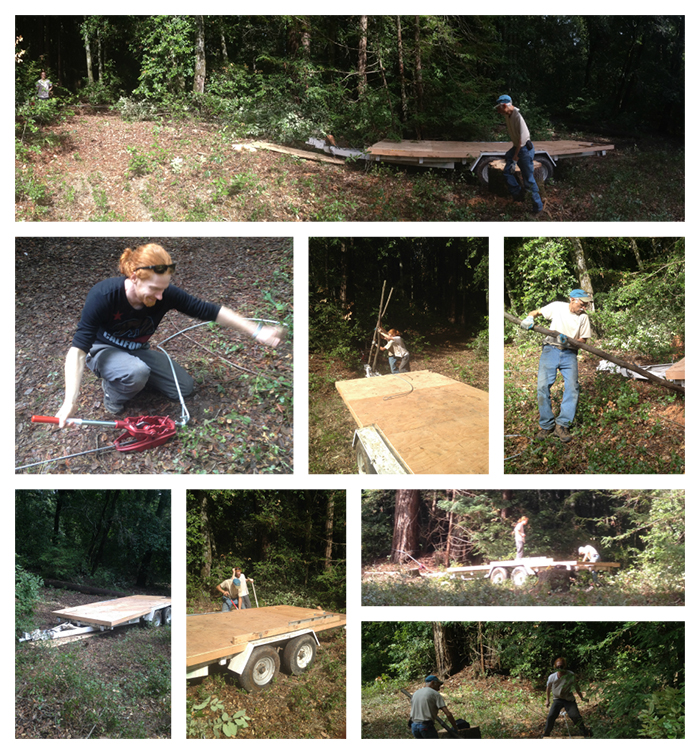 From there we had cleared most of the hurdles and tree stumps that could get in our way.  The rest was putting the walls up and adding the gables to get the “barn roof” I was hoping for (I needed the extra head space so I could stretch out and sit up completely.).  Remember, this house was being built for not one person but two, so every inch was going to matter!

While the guys lifted walls and constructed a roof I set to staining what would soon be the exterior walls.  The color?  Barn red, of course.  Anyone who has ever known me knows my fascination with the “Little Red House” that I’ve always dreamed I’d live in. 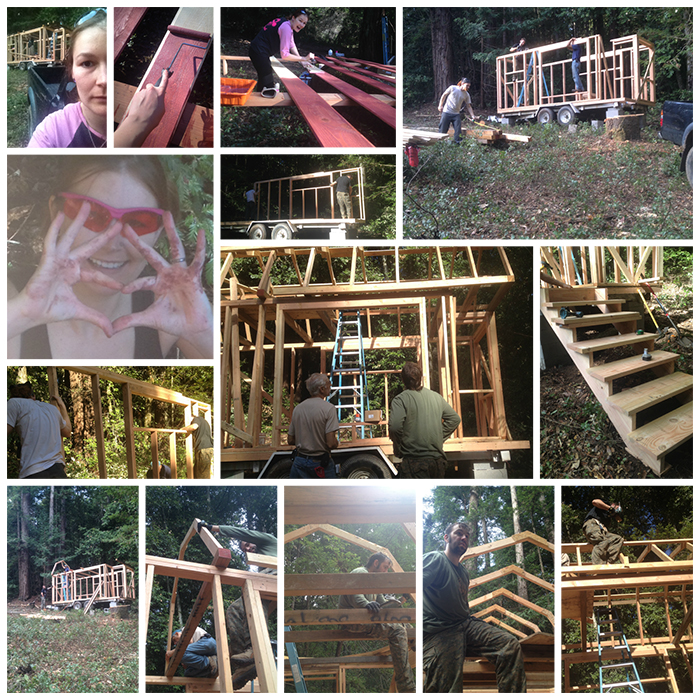 Anyway, Ross ground down anything leftover on the trailer sides we didn’t need while Jeff and I wrapped the house to protect it from the weather.  After the house was wrapped (everything is easy when its this small) we did some exterior work by laying and hammering bead board into place.

Once I could hammer no more and the guys decided to work on the roof – we were also competing with oncoming storms – I wandered off and started pulling strands of poison oak off of the redwoods.

Yes, that vine in my hand is poison oak. 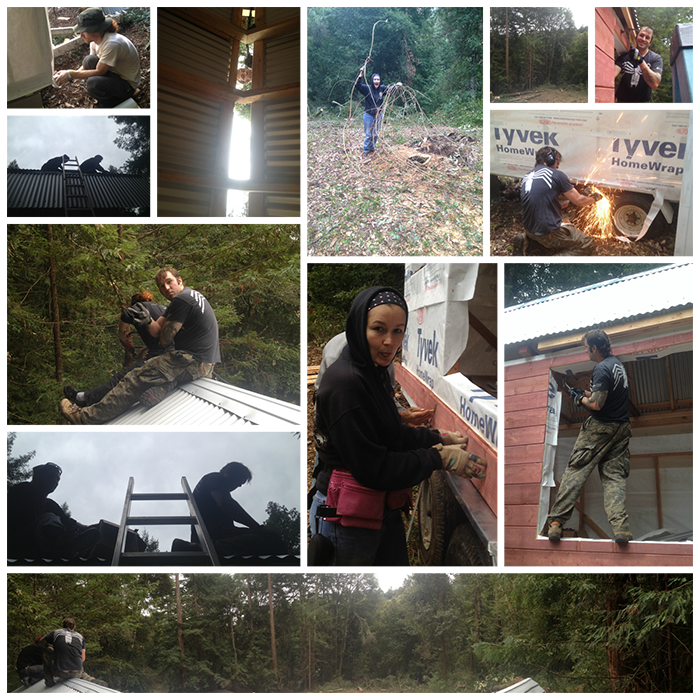 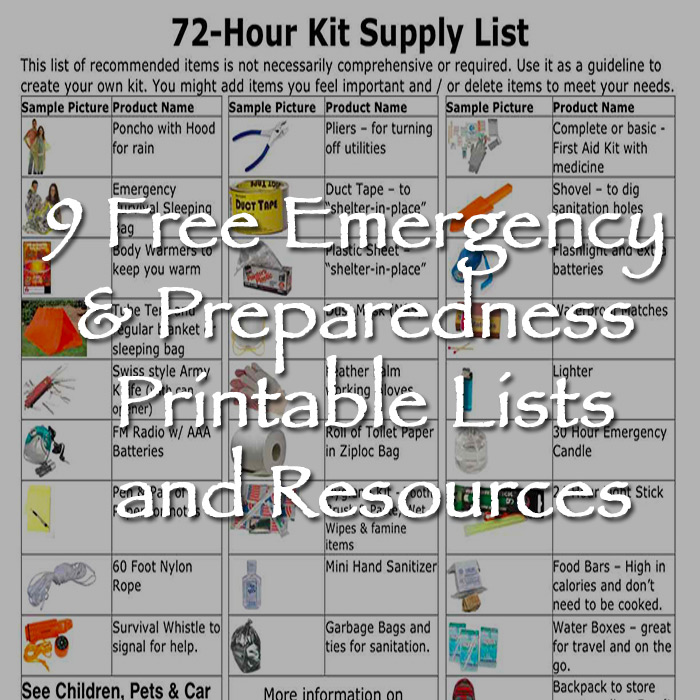 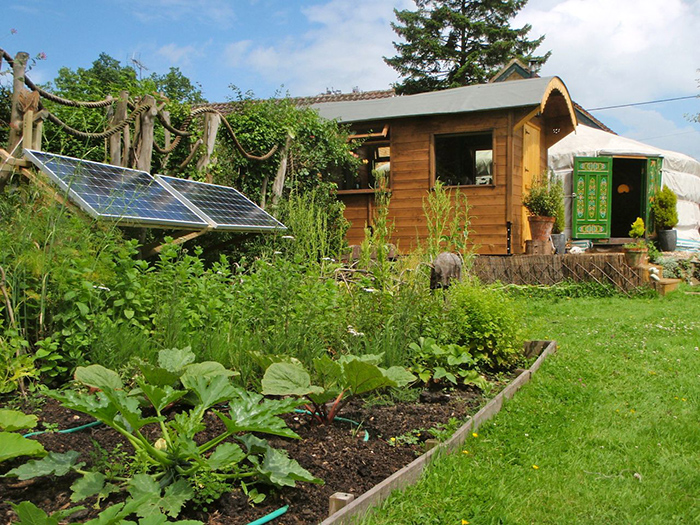 Spectacular Tiny Cabin is Off Grid Luxury on a Budget
Read Next Post →
Click here to cancel reply.