In the summer of 2016, a family intent on building an off grid tiny cabin purchased a lakeside property in the Aspen Parkland Ecoregion of Saskatchewan, Canada. Their goal was to complete their cabin before winter, and incredibly, they were able to do it in just 12 working days! 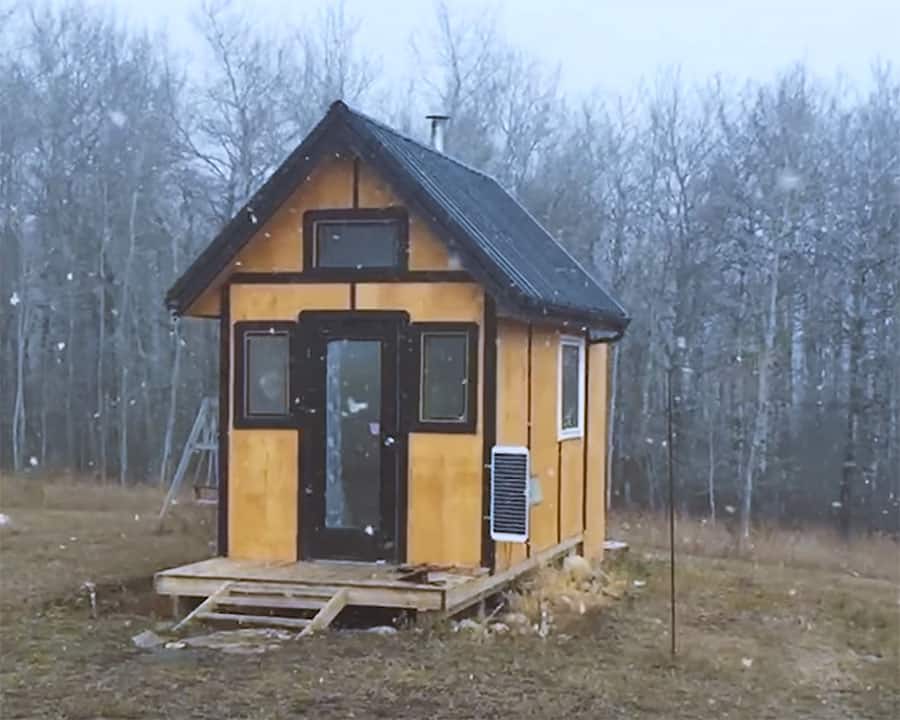 On the YouTube channel Hay Woods and Wetlands, the property owner documents the entire planning and building of this inspiring tiny cabin, as well as his family’s other off grid adventures on their beautiful property.

After spending part of the summer designing and researching costs for their future getaway home, they were ready to proceed, keeping the following considerations in mind:

As the family lives in a primary residence away from the property and their weekdays are filled with work and other activities, the cabin build would primarily take place on the weekends. Much of the work was done solo, with occasional help from friends and family.

To begin the cabin, they first leveled a piece of land to lay the 8×16 foot base. The cabin itself is 12 feet x 8 feet, with a 4-foot deck in front.

After building the base and insulating the floor, framing began by September. The majority of the framing was completed in one day, including the loft. Windows and doors were installed on day two. 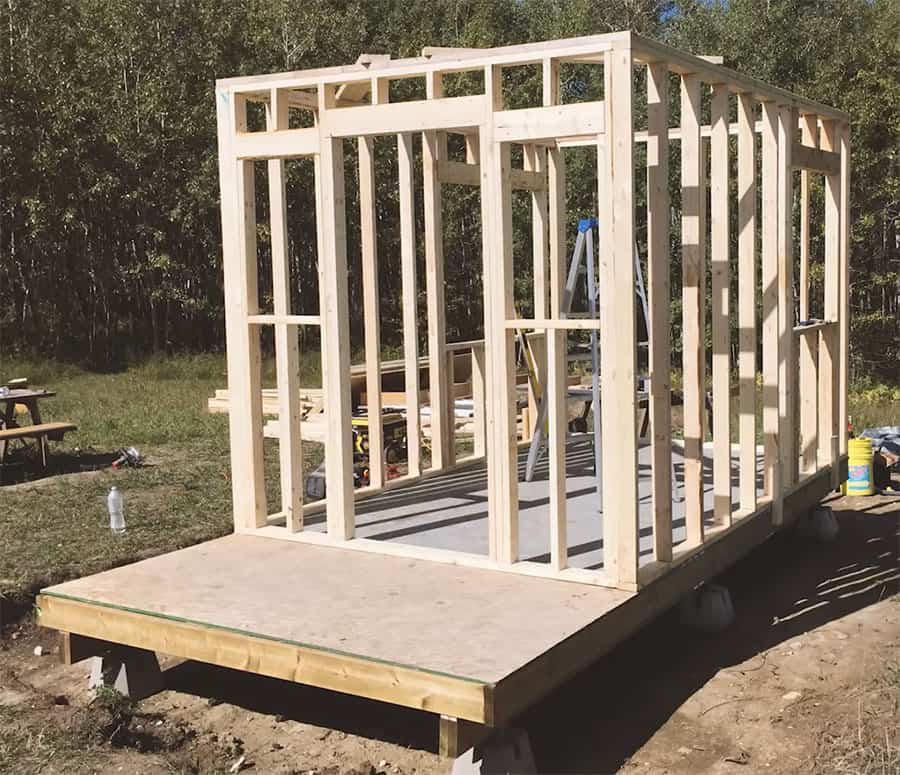 The windows and trim were completed next, as well as the installation of the metal roof. Then the exterior of the cabin was finished and sealed just in time for the season’s first snowstorm.

With the snow in October came the timely opportunity to work on the interior of the cabin, including insulating the entire interior and framing in the pantry and bathroom. Then the wallboards were placed, interior trim finished, and wiring for an eventual solar power system added.

For heat, the cabin has a little wood stove mounted on the wall with a custom-built wall-mounted heat shield. Other features inside the cabin include shelving, a kitchen counter, a loft sleeping area for the children, and a custom-built pull-out bench/bed on the main floor.

At only 96 square feet, the cabin provides the comforts of a larger home on a small scale, the perfect little respite for the family to enjoy time away from the city. This is exactly what most off grid enthusiasts dream of building for themselves, and should provide a great deal of inspiration for those limited by time and budget constraints. 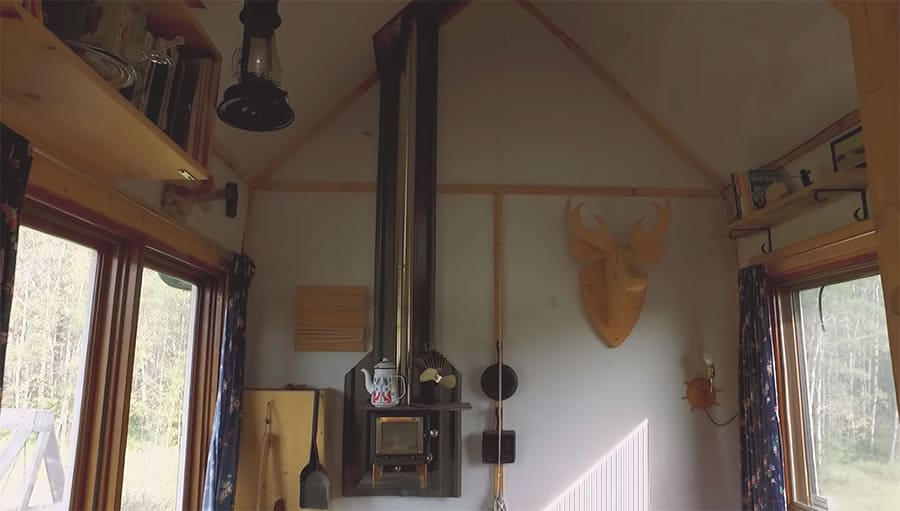 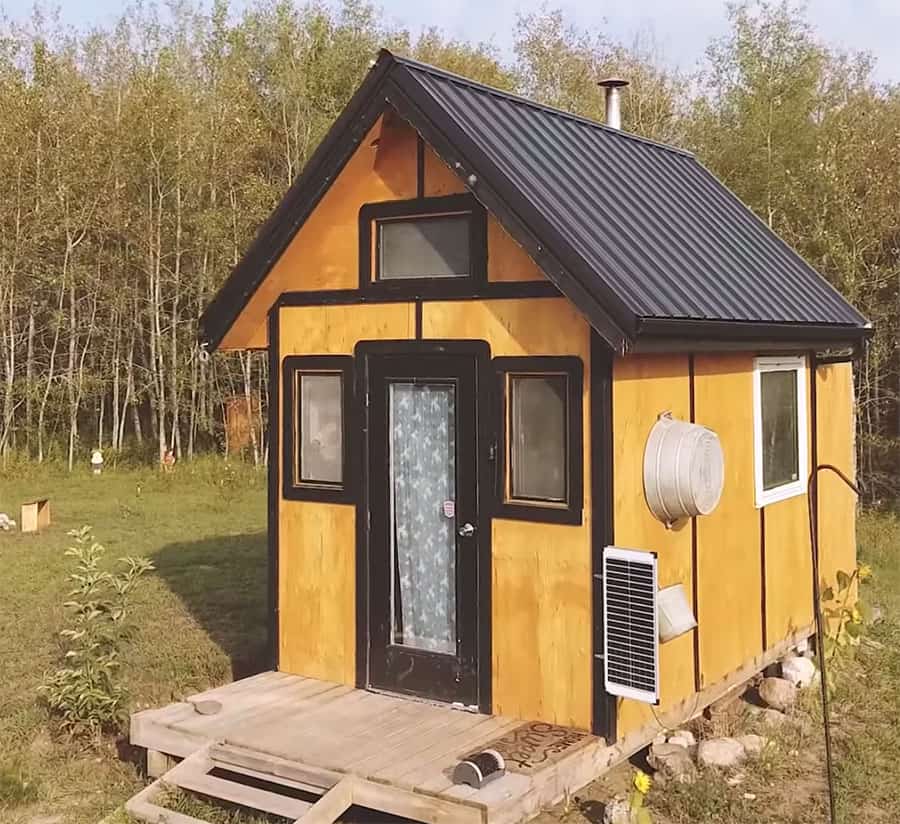 These folks did an incredible job of documenting their cabin build from start to finish. See the videos below for details on each step of the building process, as well as an updated cabin tour. Also, be sure to subscribe to Hay Woods and Wetlands on YouTube to follow their off grid adventures.

We love seeing people like this who show the world what’s possible with a dream, careful planning, and determination.