Large cities almost all have areas that are largely abandoned, falling into disrepair, and are in need of finding a purpose again. This is especially true in places like New Orleans (where many areas simply never recovered after Hurricane Katrina) and some “rust belt” cities like Detroit.

Another thing almost all large cities have in common are areas that are classified as “food deserts”, or areas where grocery stores are few and far between (often 5+ miles), which are almost exclusively in poor neighborhoods where residents have few options when it comes to produce and anything that resembles healthy food.

One promising solution to these issues is to take advantage of urban farming. Not only does it help to beautify areas and give them purpose once again, but it also makes it easier to provide the produce and healthier foods lacking in many inner cities. 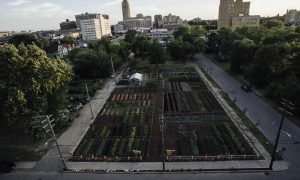 This is why a project out of Detroit, referred to as an “agrihood” (short for agricultural neighborhood), could be a model for others to follow or to adapt their own from this basic framework.

The Michigan Urban Farming Initiative (MUFI) is taking empty lots and abandoned buildings, and turning them into urban farming areas, ones that can provide fresh produce to 2,000 households free of charge.

With a 2-acre garden, an orchard with over 200 trees, a sensory garden for kids, and plans for a community center, MUFI is more than just an urban garden. They help educate residents about nutrition, provide better food security for those in need, and attract new residents and investments to help fund and grow their urban farming efforts.