The most basic of human needs is clean drinking water. Water is what, at least here on Earth, makes life possible and helps it thrive.

Unfortunately, there are many areas of the world that lack access to a reliable and clean source of drinking water. There are various companies producing a variety of machines and gadgets to try and either filter, desalinize or otherwise supply the water that is needed by all people to survive. Some are focused on smaller-scale, personal water systems, which are great for camping, exploring, and the like, and others are more focused on community water systems meant to supply water to villages, towns, and so on.

One such company, out of Israel, is Watergen, and they have developed a system that uses the basic principles of the water cycle, namely evaporation, in a system that can be used in a scalable manner with the goal to be able to help entire nations! 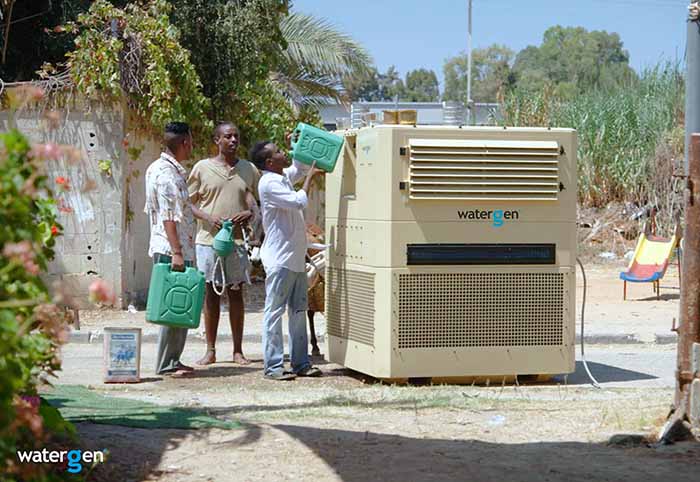 The Watergen system, using a system of plastic leaves to direct air around, extracts the water that is naturally present in the air around us. The system is at optimal capacity in warmer and wetter climates, but can still generate clean water in other environments as well.

For now, they have 3 different sizes of system, which they hope to have commercially available by sometime in 2017. They range in size/capacity from about 4 gallons a day, which is suitable for single family or individual use, up to a unit that can produce up to 825 gallons per day, which would be able to supply a community with clean drinking water.

Given the danger our water supply is often in, and with reports showing that much of the standard water supply most people rely on is contaminated by one thing or another, such systems could be invaluable to those living off-grid or looking to in the future.

The optimal operating range for these systems is around 80 degrees and 60% humidity, which would work well in large areas of the U.S., especially in the south, or at least in the summer and spring in an even wider range, so having a unit that produces more than you need in the more optimal months would allow you to store water for the months when the system wouldn’t be as productive.

This is also just the optimal range, not the only range that it will work at, but how much water you can produce will vary depending on the conditions. So sometimes you will get more, and sometimes you will get less, but being able to generate clean drinking water with minimal power, out of literally, thin air, is no small feat. Water-Gen is also working on other water solutions for consumer use. One of their systems, hooked up to a solar or wind power supply, could at the very least supplement your existing water source allowing you to maintain a surplus of clean drinking water for emergency use