Ever wonder what the power grid looks like? This map of the USA shows the 3 main grids which distribute electrical power across the nation. It includes information on voltages, and AC (alternating current) and DC (direct current) lines.

There is actually no “National Power Grid” that exists, but rather 3 interconnected power grids. The Eastern, Western, and get this, the Texas interconnected system. That’s right, Texas practically has it’s own power grid. (Why is that…?) 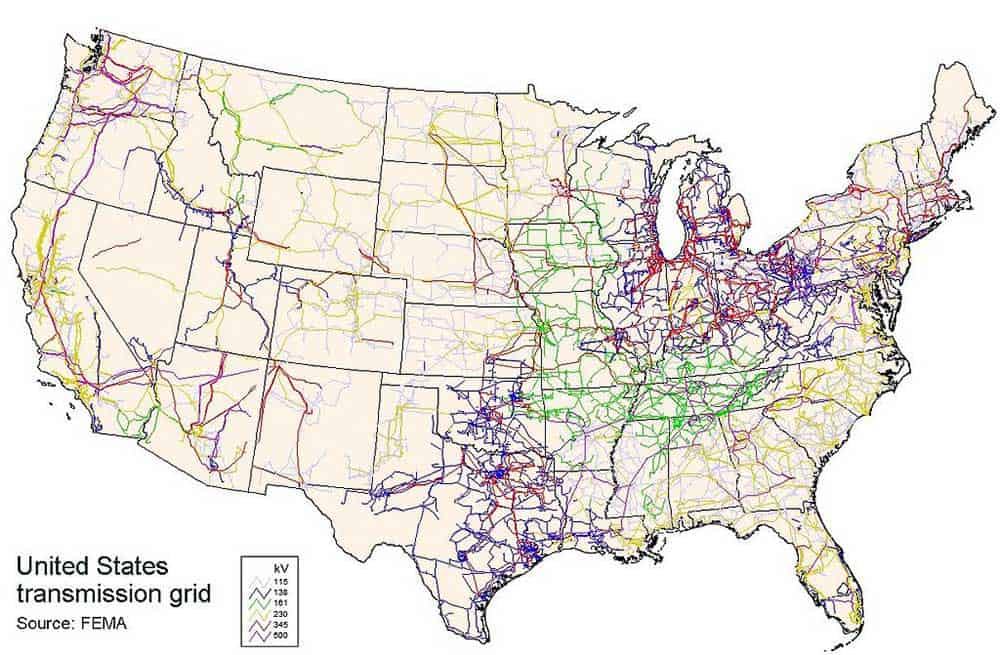 “…The grid of electric power lines has evolved into three large interconnected systems that move electricity around the country. Standards have been developed by the electric power industry to ensure coordination for the linked operations. Challenges facing the power grid include getting approval for corridors of land for new transmission lines within states or that cross multiple states, and the financing and constructing of new transmission lines to assure continued reliability of our electricity supply….” ~ EIA

Why Are We Concerned With The Grid? Aren’t We Supposed To Be OFF GRID?

Well, having this knowledge might help you. This helps with the strategic planning of your off grid location. It could help you in picking out a good location for your off grid homestead that is far enough away from any major grid ties that you can truly be self-reliant.

It could show you areas to avoid in the event of a statewide blackout. And it can help predict what regions will be affected most by a full grid blackout.

Besides all that. This is just good information to know.

[…] miles of high-voltage transmission lines. The nation also has 55,000 electrical substations and 5.5 million miles of distribution lines that power millions of homes and businesses,” a report last year […]

Living Off Grid: “If You’re Using Technology, You’re NOT Truly Off Grid!”