Vertical farming is the future of agriculture, though it’s not a new concept at all. The Babylonians did it long ago with a vertical farm most of us have heard of – the legendary Hanging Gardens.

We just need to figure out a way to do it economically and practically. There are many problems inherent with creating a vertical farm, however, two of those problems stand out above them all. Lighting and cost, and in that order.

Most people, when they first hear about the concept of a vertical farm, get excited about the prospect. However, that excitement quickly wanes and turns to skepticism about whether it could work at all. Economical questions arise, and practicality comes into play.

The biggest problems with vertical farms:

How do you get light to the center of the building so that crops can grow, and how do you build the farm in a cost-efficient manner?

It’s very expensive to build a building, especially one that will be a farm. Buildings were not originally designed to house crops. Buildings are built for people. Repurposing preexisting buildings is an option, but the problem of lighting the interior so the plants near the center of the building get enough light is still an issue.

If one could get past the problem of lighting, the expense would take care of itself IF you light the interior of the vertical farm naturally with sunlight. Over time, the increased crop yields would more than pay for the initial expense of repurposing older buildings into farms, or perhaps even the costs of building a vertical farm from the ground up.

Lighting the interior of the vertical farm with artificial light is very expensive and could be counterproductive.

Artificial lighting makes it difficult if not impossible to turn a profit. I mean, let’s get real, that’s what farming is about – money. Sure, we feed people. But, in the end, a farm is a business, and the bottom line is that it’s about the bottom line. Farmers don’t want to operate at a loss unless it’s temporary and there’s a plan to turn a profit at a later date.

Treehugger wrote Vertical Farms Aren’t Going to Solve Our Food Problems back in 2010.

“…For obvious reasons, no one has ever proposed stacking solar photovoltaic panels one above the other. For the same reasons, crop fields cannot be layered one above the other without providing a substitute for the sunlight that has been cut off. Even with all-glass walls, the amount of light reaching plants on all but the top story of a high-rise would fall far, far short of what is needed…”

And they conclude [incorrectly] that artificial light must be used to properly light the crops.

“…As a result, the lion’s share of a vertical farm’s lighting would have to be supplied artificially, consuming resource-intensive electricity rather than free sunlight…”

They say also that to light enough farms to produce the amount of wheat we already produce annually, light would need to be increased by 8 times.

Others have tried to solve the lighting problem with design. Repurposing an existing building might not be feasible with artificial lighting.

Vertical or Diagonal? In 2008 Treehugger wrote Vertical (Diagonal?) Farm from Work AC in NYC which showcased a few vertical farm designs that tried to use natural sunlight. One design was a stepped terrace, which from a design perspective is beautiful, and would probably be practical. However, it would not maximize the use of the total footprint of the land area it covers.

WORKac’s version of vertical farming combines migrant farmers’ housing in a series of stepped terraces with a farmer’s market and public space below. The terraces allow in-soil growing (and a small golf course), duplicating the surface of the site once. The entire project is supported, literally, by culture with sculpture-structures holding it up. This project was commissioned by New York magazine for a vacant lot in lower Manhattan.

Vertical farm concept pioneer Dickson Despommier claims that one acre of vertical indoor farming is equal to 4-6 acres of traditional farming because crops could be stacked in multiple layers on each floor of a building, thereby maximizing the yield of the land space which the farm occupies. This also should (if we solve the lighting problem) increase the economic benefit of a vertical farm and make it profitable.

Perhaps one could design a vertical farm building that takes advantage of available sunlight, such as the Pyramid Farm designed by Eric Ellingsen and Dickson Despommier.

Is this pyramid vertical farm design concept efficient with regard to space consumed versus the total annual crop yield? This design is gorgeous, but in this author’s opinion, may not be practical, and perhaps not cost effective.

Personally, I love the pyramid design and think it would provide a great feature at a park or attraction to showcase vertical farming, or in a “city gardens” type of environment. I think this one should be built and tested. What we could learn from it might just give us more insight on how to solve the problem.

Inhabitat did an article on this particular design back in 2009 titled “Pyramid Farm is a Vision of Vertical Agriculture for 2060“.

The problem is, we need vertical farms NOW! Not in another 48 years. In 50 years, if we don’t change, we may hit a point where our very society will collapse in on itself under the sheer weight of our 7 billion world population. 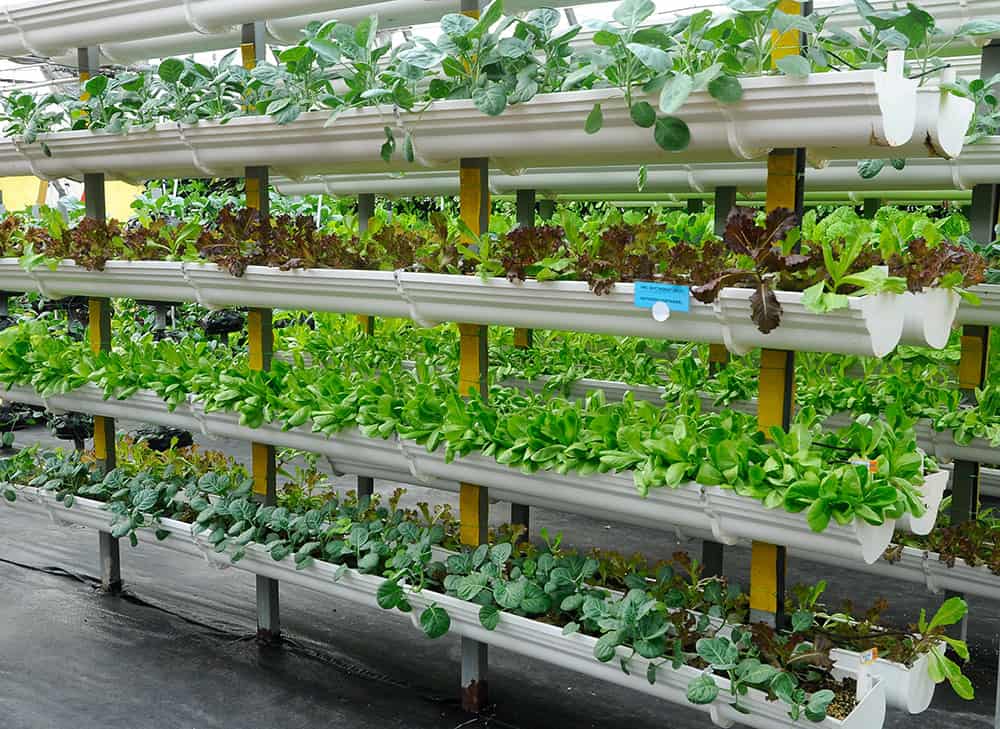 How do you feed our growing population without more land to grow on? You go vertical. The concept is sound, the solution seems simple, but figuring out a way to fund it, and make it profitable and practical, is the question.

Use the available sunlight and “pump” it into the center of the building with water filled clear tubing, much like the water bottle lighting system people are using in third world countries.

Perhaps fiber optics could work, however, fiber is not cheap, and then you have to figure out an irrigation system.

Why not use one system to solve multiple problems?

Hydroponics and Aeroponics allow crops to be “stacked” in vertical columns and long rows. This is called High-Density Vertical Growth. Treehugger did an article HDVG back in 2008.

Growing vertically isn’t a new concept, and as mentioned in the beginning of this article, ancient Babylonians had it figured out.

Now we have better technology and materials and can create vertical farms like the world has never seen, and we can produce 100 times the food we produce now. More than enough to feed the world’s 7 billion people.

Here’s an idea that might be feasible, and that combines all the technologies listed above, plus a new system that not only lights the interior of the vertical farm but also provides the hydroponic irrigation system to water and provide nutrients to the crops.

The building is almost cube-shaped. Geometrically, a square maximizes efficient use of space. The actual land area covered by the building’s footprint is just 1 acre. The building itself is 10 stories high, creating 10 acres of usable area.

Two sides of the building are covered in glass to produce light levels similar to traditional greenhouses, where more sensitive crops could be grown. These areas can be climate controlled for year-round growing of almost any crop.

Crops can be grown via the High-Density Vertical Growth systems. This maximizes the efficient use of vertical space between floors. 6-10 levels of crops could be grown per row, per floor, producing 6-10 times the yield per acre for each floor. Meaning at maximum use of space, the yield of this building could be up to 100 times what traditional farming could produce on 1 acre of land.

Even with only 5 levels of crops per floor, that is 50 times the food production per acre of land in this 10-story, 1-acre complex. What farmer wouldn’t want to do that? Heck, what investor wouldn’t want in on a deal like that? Being able to produce even 50% of this amount of food per acre could more than pay for the initial expense of the building and allow for a quicker return on the investment.

So how do you provide the lighting?

By using really big water bottles, and clear piping to “pump” the light and the water into the core of the building.

The lighting system is designed to provide both light and water. Nutrients can be added to the water and a mist can be used to water the crops. This solves two problems – getting light to the interior crops, and provides nutrient-laden water to the crops 24 hours a day.

NOTE: this system may produce too much heat through the lighting system to make it viable, or the light may not penetrate deep enough into the core of the building to provide enough light to the crops in that area. Also, these spherical light collectors appear over-sized on purpose for illustration purposes only, to demonstrate the concept. It’s possible to make them much smaller. The biggest question is how far the sunlight can be directed to the interior of the building’s core.

The vertical farm lighting system consists of vertical clear piping combined with a spherical “light collector” on the roof. There are also smaller horizontal tubes connecting the entire system into a grid-like structure.

Will the system work? Who knows… no one has tried it.

One thing is for sure. Vertical farming is possible. This is an attempt to make it more feasible economically and more practical.

Could this be a solution to the world’s food woes, or it could just be a crazy idea?

What do you think? 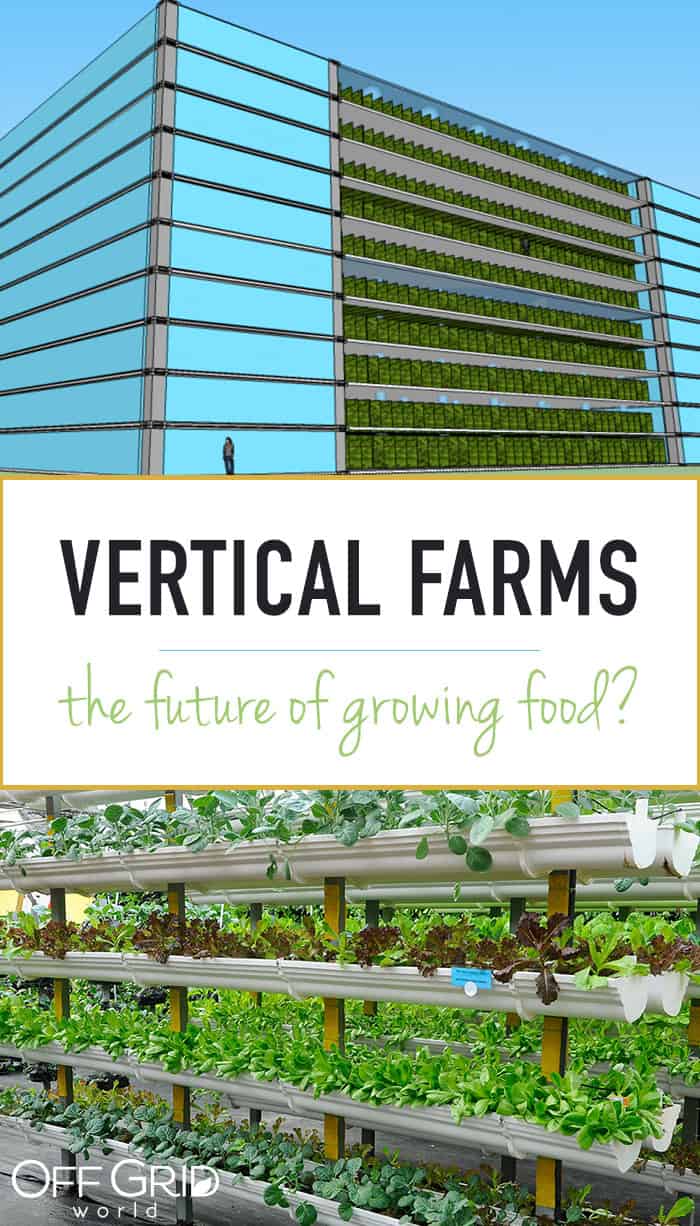