While American soldiers fought around the globe during World War I, citizens at home faced rationing and food shortages. The government urged people to grow their own food to supplement rations and to free up farm-grown produce for soldiers overseas.

Americans all across the nation responded to the call by filling their yards with edibles. These gardens came to be known as Victory Gardens and were seen as the ultimate act of patriotism by those on the home front. 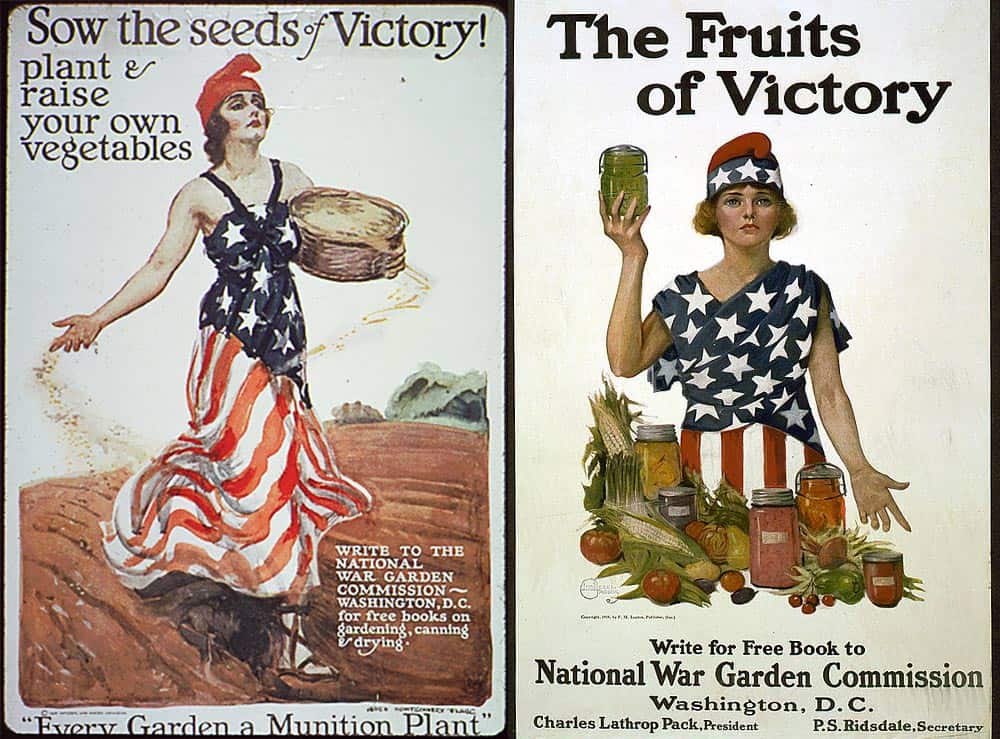 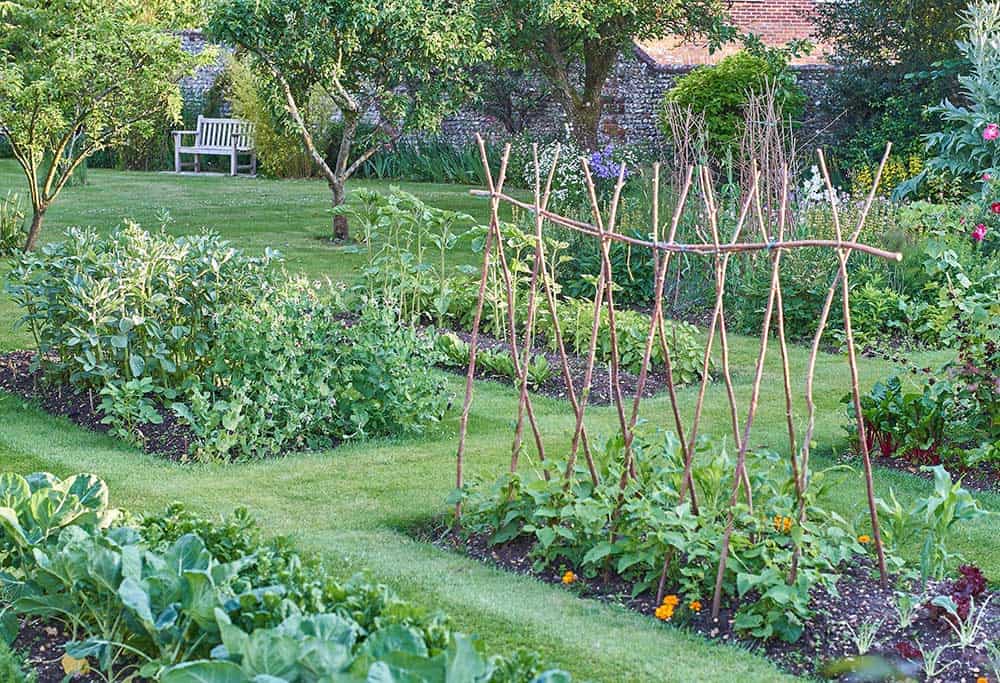 The rise of Victory Gardens

The U.S. Department of Agriculture distributed thousands of pamphlets, posters, and advertisements promoting Victory Gardens starting around 1918. A pamphlet from 1919 proclaimed “War gardening will permanently establish itself as Victory gardening because its peace-time value will fully equal its war-time worth.”

In addition to the propaganda promoting gardening, the government printed recipe books teaching gardeners how to prepare meals with their homegrown produce. Some pamphlets included tips on what types of crops to grow in various growing environments along with plant-specific information to ensure growing success. 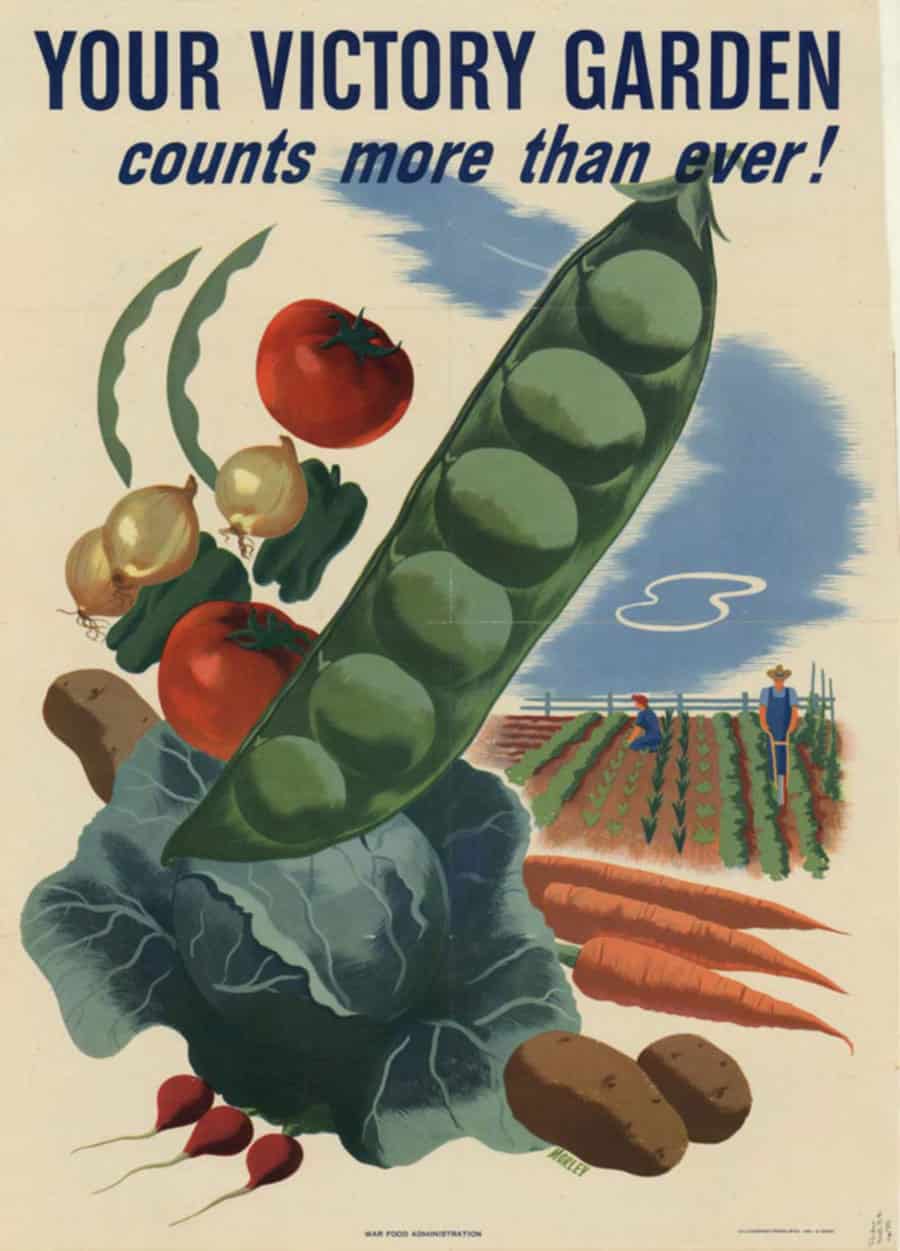 The tracts of vacant land in every city, town and village should be used for growing vegetables. To cultivate these and make them add their contribution to the national food supply is a duty that no community can afford to overlook. People who have no vacant land of their own should be encouraged to grow gardens for their own protection from the high cost of living and to help the general situation. Landowners should be glad to contribute the use of their property for this patriotic purpose. Community organization should bring gardener and land together. – “Victory Gardens Feed the Hungry” by Charles Lathrop Pack, 1919

Victory Gardens made a big comeback during World War II, and by 1944 home gardeners produced 40 percent of vegetables grown in the United States in over 20 million gardens. 20 million! That equated to about 80 billion pounds of food!

People without yards learned to grow food in containers, window boxes, and even on roofs. Schools across the country planted gardens on their grounds, teaching kids to sow, weed, and harvest vegetables, and used the produce in school lunches. 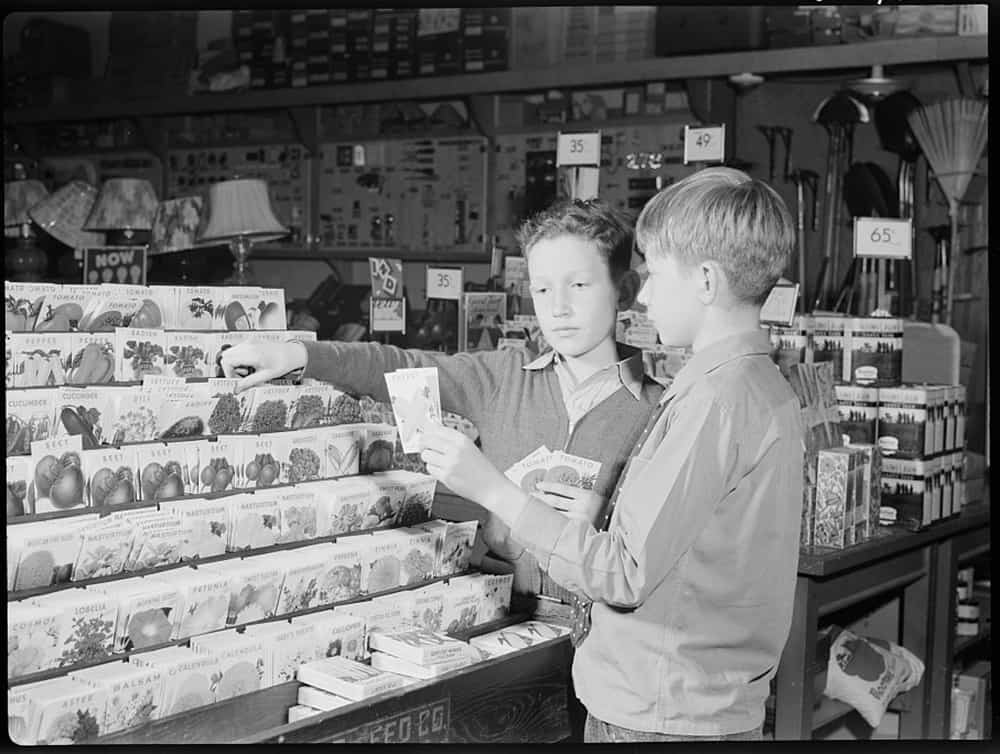 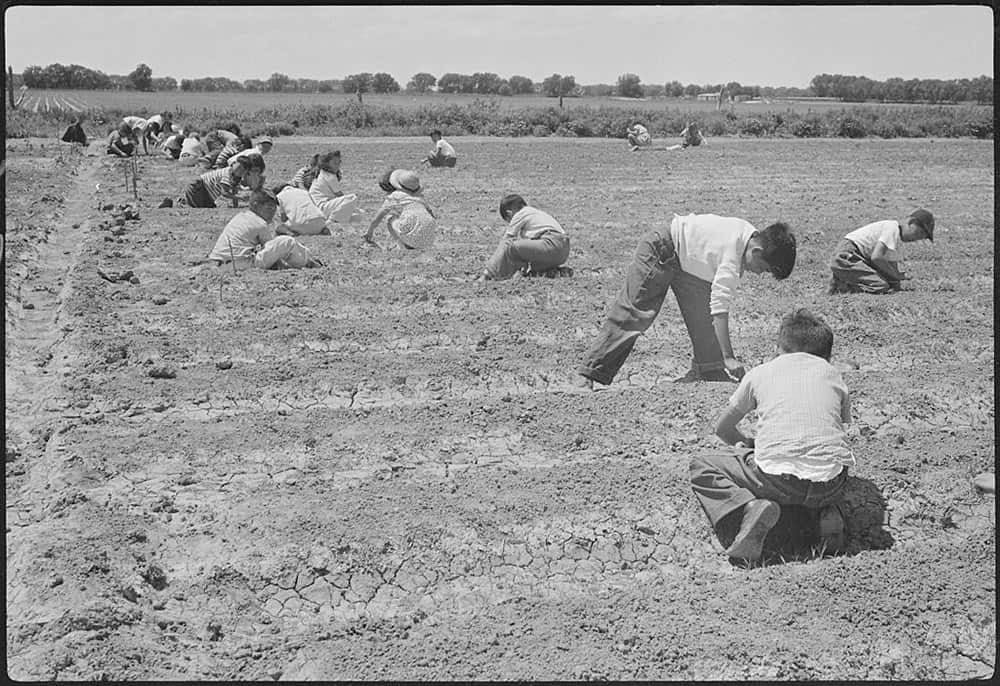 Encouraging citizens to grow food served not just to help with food shortages but as a nationwide morale booster. Gardening is proven to reduce stress, but it also gave people a sense of purpose in an otherwise uncertain time. By growing their own food, Americans gained self-sufficiency while contributing to the war effort. 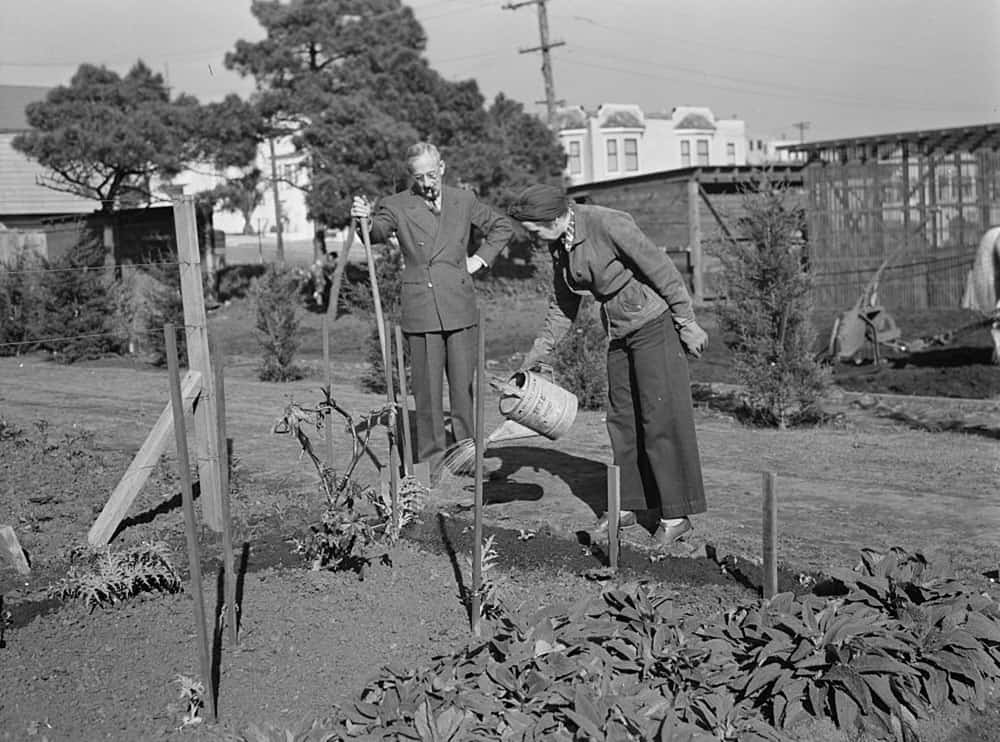 “Frequent watering of the Victory Garden is necessary during the early stages of growth.” Office of War Information, 1944 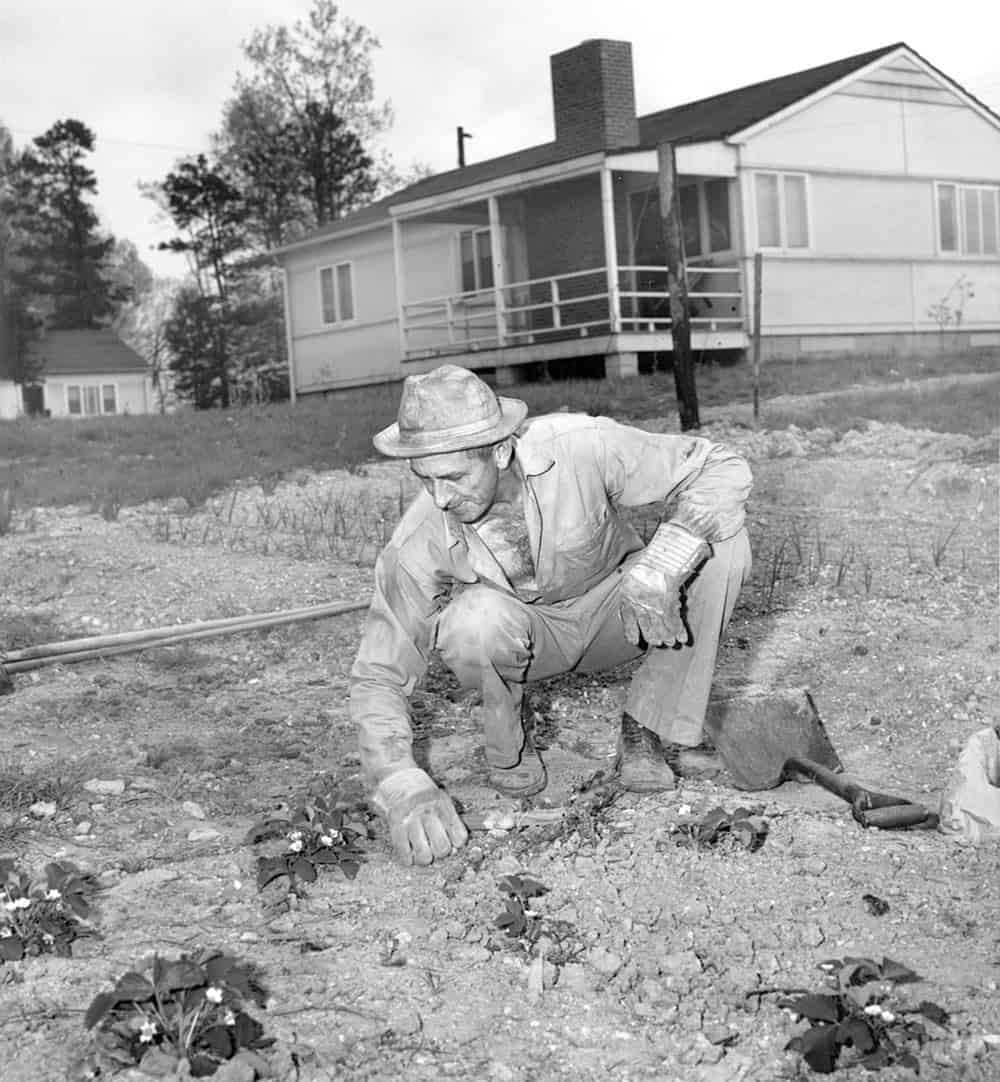 “Gardens flourished on the home front because people were eager to build their own community-based food security, and to cultivate something beautiful and useful in times of great stress and uncertainty” – Rose Hayden-Smith, author of “Sowing the Seeds of Victory: American Gardening Programs of World War I”, via New York Times. 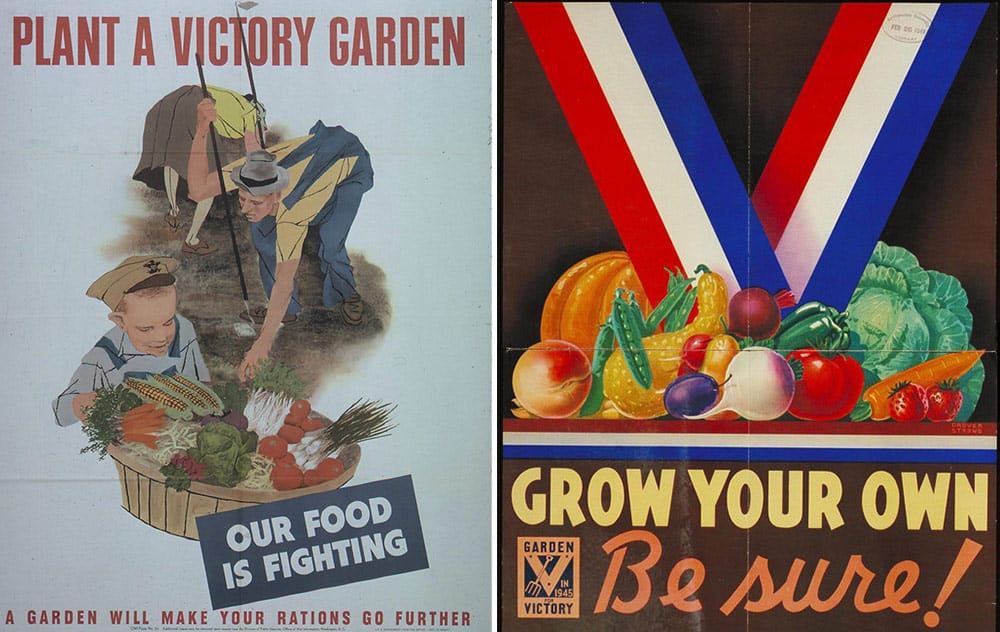 I find it interesting that the government heavily promoted turning yards into mini-farms early in the 20th century, but now you can get fined by your city or HOA for doing so. Many cities and suburban communities condemn anything beyond a plush, green lawn. Still, I think everyone can grow their own “Victory Garden” of any size, wherever they reside, and reap incredible benefits emotionally, physically, and financially.

In tumultuous times, whether it’s a war or a pandemic, growing food provides an invaluable sense of security. None of us could have predicted that we’d experience a global pandemic this year, nor the impact it would have on all of us.

In recent weeks many of us have witnessed, for the first time in our lives, empty grocery store shelves. We’ve also seen people panic over everyday essentials that we normally take for granted. Two months ago this idea would have seemed preposterous. 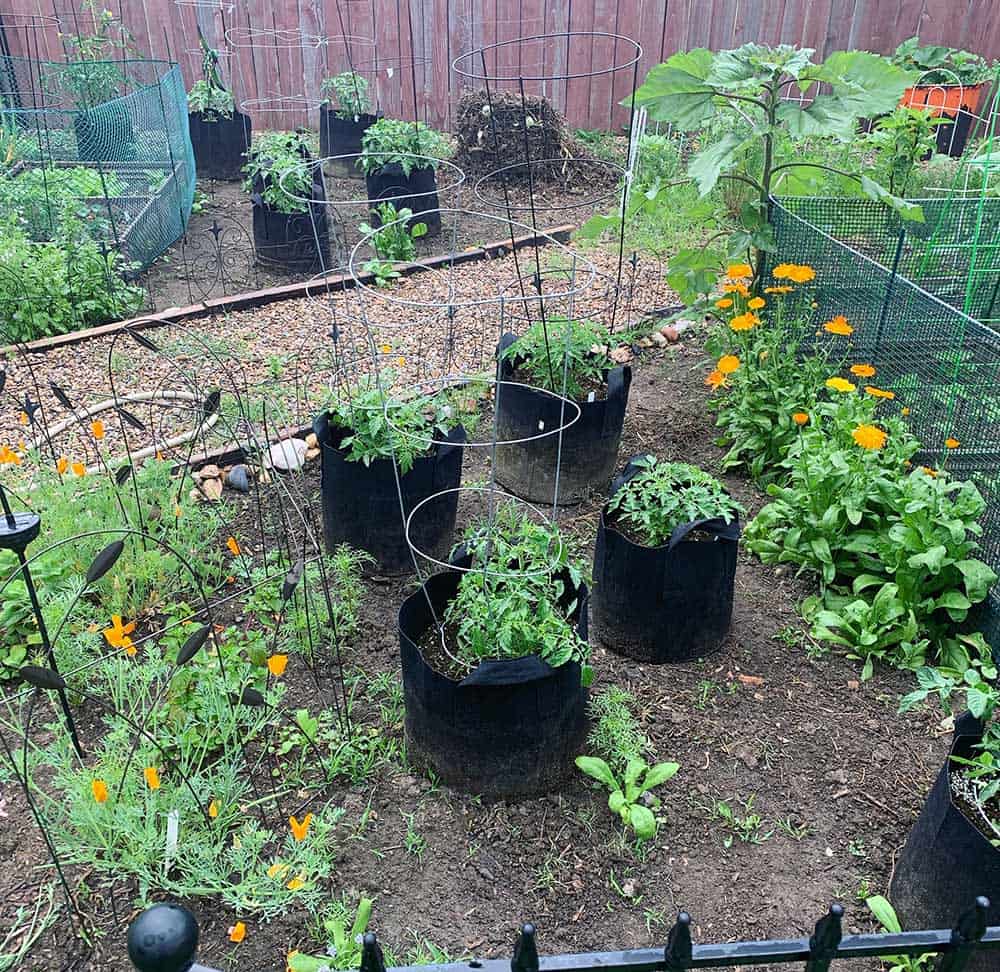 When times are good and food is plentiful, people grow gardens because they enjoy it. It’s a great way to get outdoors and create something beautiful, to feed a family, to offset grocery costs, and to gain some independence from the commercial food system.

When store shelves are bare, a home garden can provide families some or all of their produce needs. Vegetables, herbs, and fruits of many varieties can be grown by almost anyone, whether they’re growing on a rural acreage or an inner-city apartment balcony. 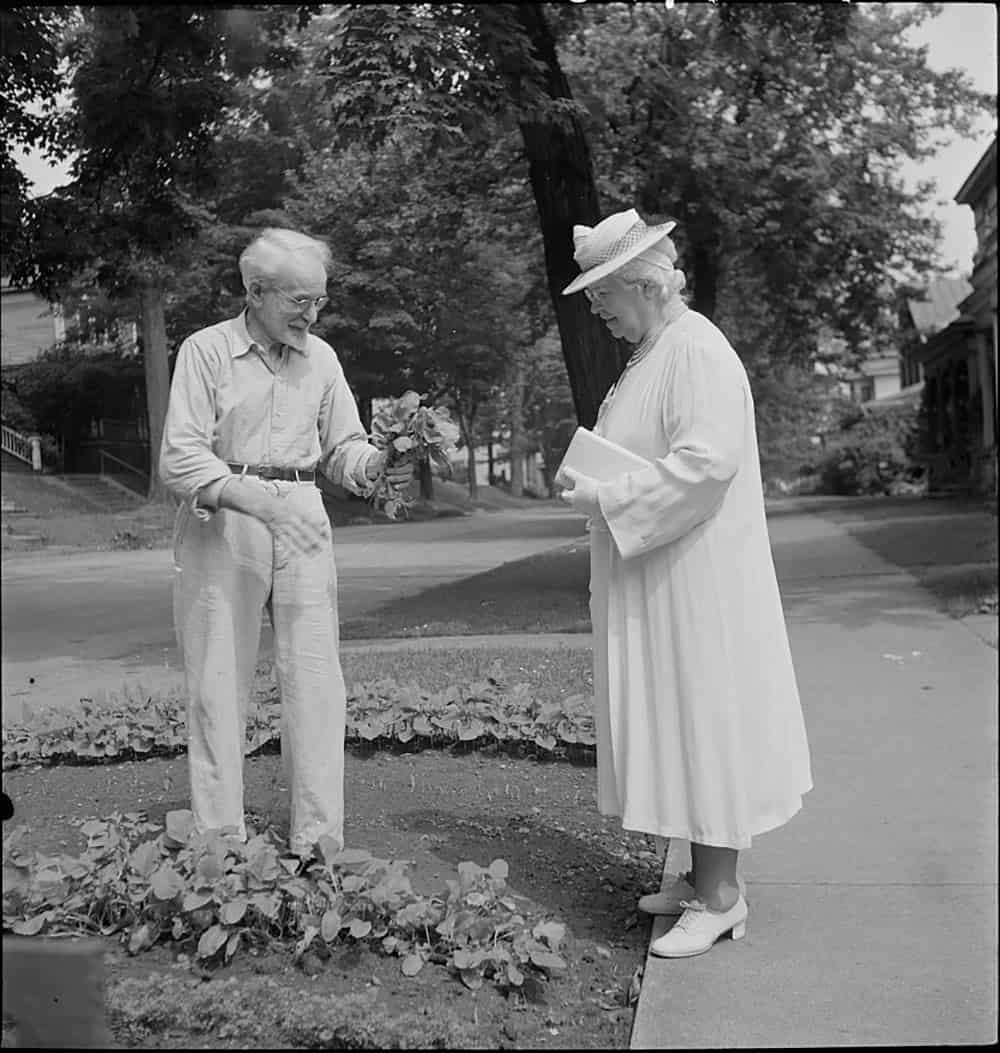 A couple in their victory garden, Oswego, New York 1943

Growing your own Victory Garden

There’s no magic to growing your own food. Grow what you can, where you can. If you’re a beginner, grow what’s fast and easy to dip your toe into the world of gardening.

Start by buying some seeds or procuring some extras from gardener friends. Most seed companies have catalogs you can order or view online and choose your plants and seeds without leaving your couch. Many stores in your area likely carry a seed selection as well. If you don’t want to go into the store to find seeds, you should be able to call around and see who has what you want, then request a curbside pickup. 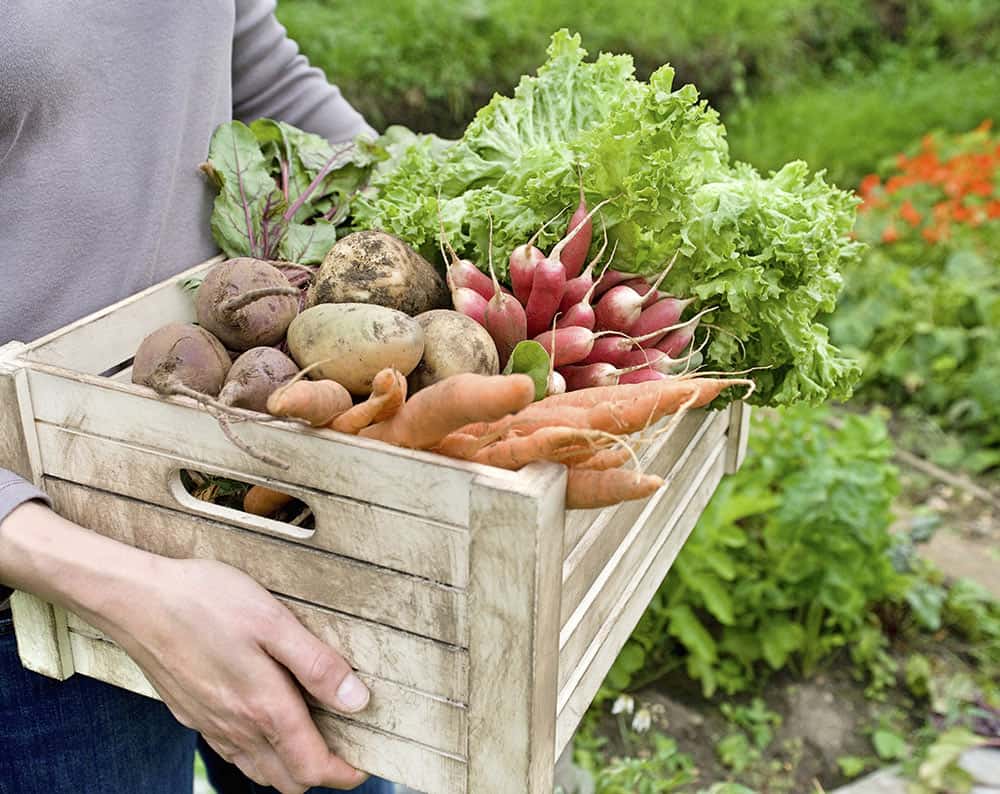 Even if you can’t grow enough food to completely feed your family, every little bit helps. If you have plenty of space, you may be able to grow a lot more food than you need, and in that case, you can share with family, friends, and neighbors.

Don’t have a yard? Try growing herbs on your windowsills or baby greens in window boxes. A few pots on a patio can provide you a surprisingly vast selection of herbs, leafy greens, and even fruits. Heck, even growing sprouts in jars on your kitchen counter will yield a quick, healthy harvest of mini greens. 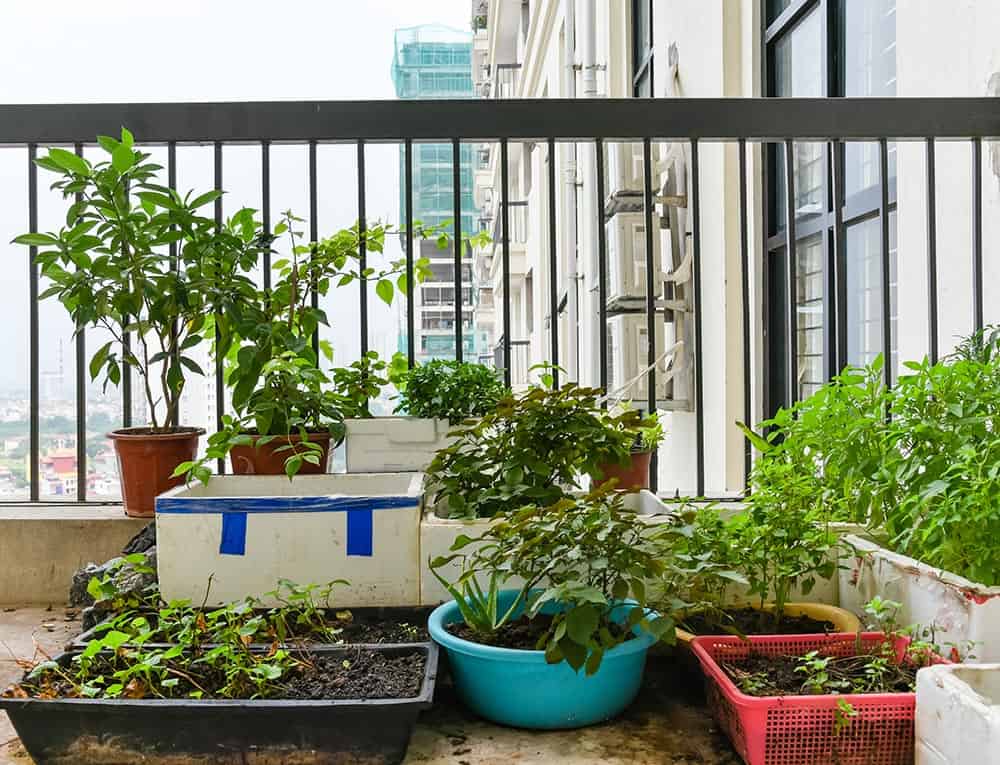 If you really want to take the old Victory Garden concept to the max, turn your yard into a farm! If your city allows it, that is. Below are some interesting images from a 1943 gardening pamphlet, ABC of Victory Gardening, showing how to turn a yard into a farm capable of feeding a family.

This idea is basically subsistence farming, or growing enough to feed the grower and their family for the year. While farming an entire backyard may not be practical for many, if you can do it, why not? 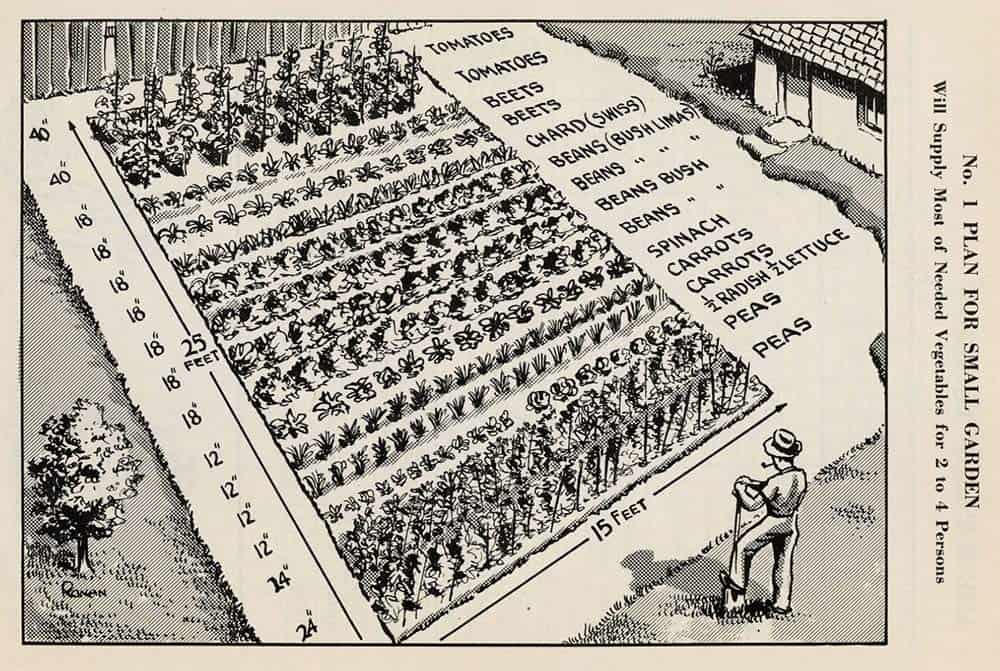 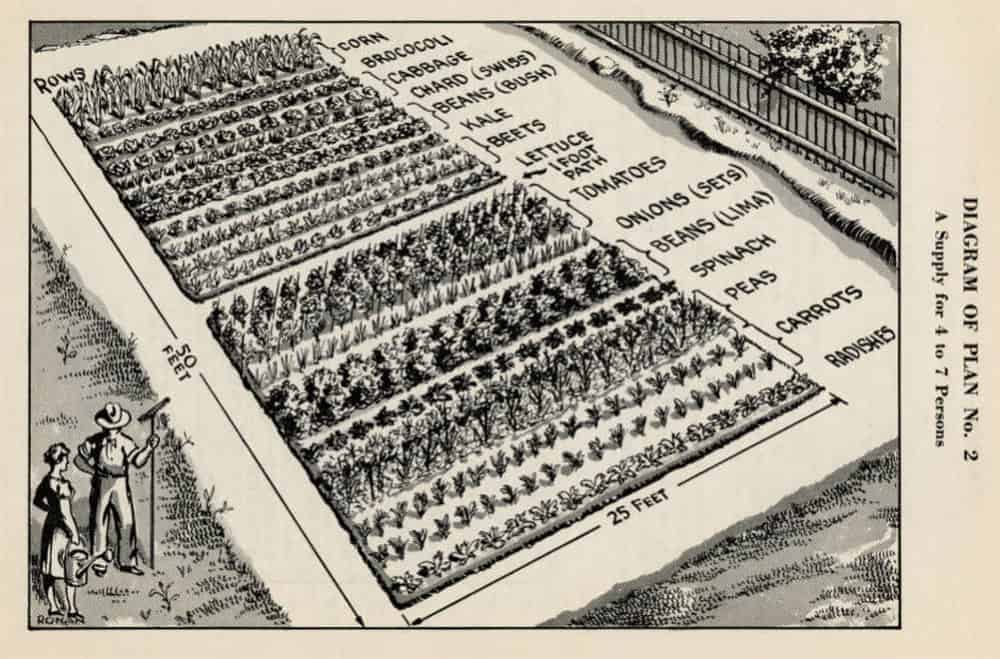 What does Victory Gardening mean to you?

To me, a Victory Garden means more than providing food for my family when it’s dangerous to leave the house and store shelves are empty. It means healthy, organic food that I raised from seeds. It means knowing exactly where my food comes from. It means having more than enough to give away to family and neighbors.

While we may grow food for different reasons now than our grandparents did, I think we can all benefit from this way of thinking.

What does Victory Gardening mean to you? 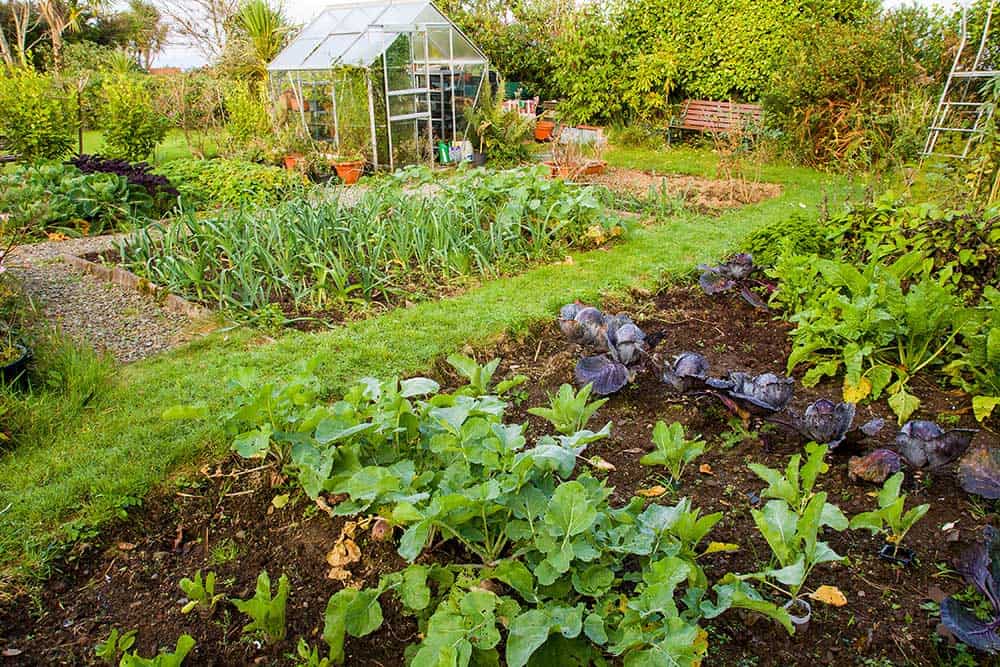 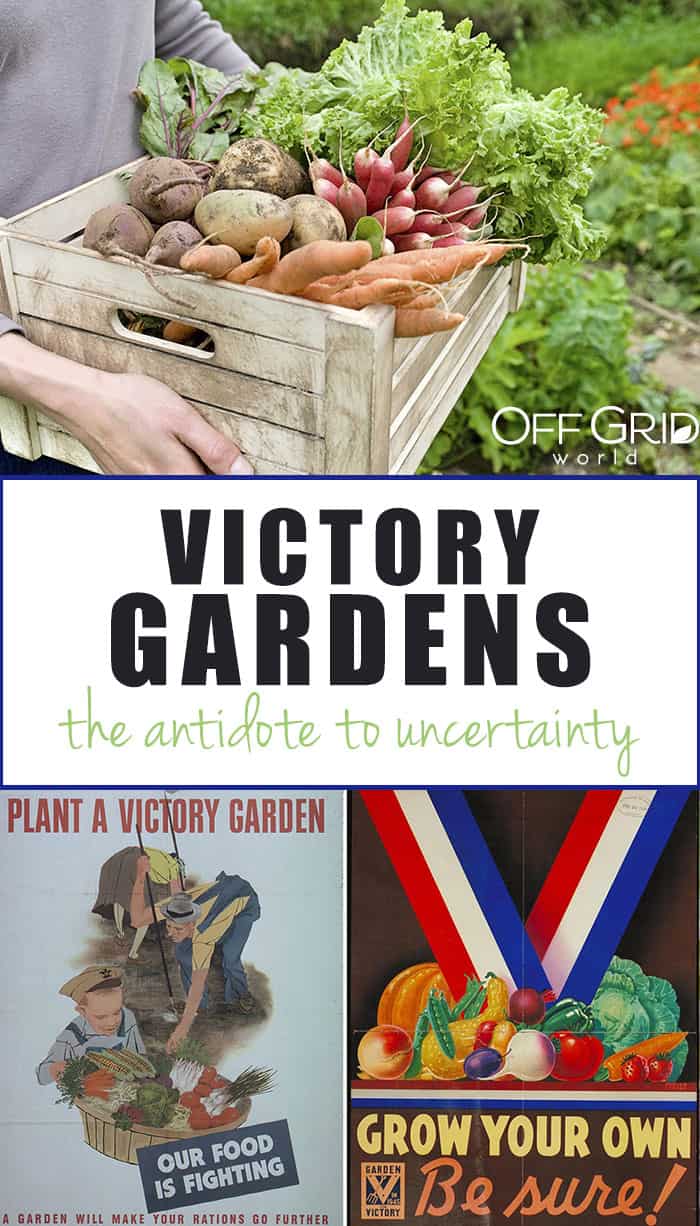